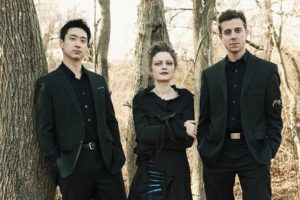 Hailed as “a first-class ensemble” (Orange County Register), “unfailingly stylish” (The Strad), “technically dazzling” (Long Beach Gazette), “flawless” (New York Concert Review) and “the epitome of what chamber musicians should be” (Palm Beach Daily News), Trio Céleste has firmly established itself as one of the most dynamic chamber music ensembles on the classical music scene today.

The 2017/18 highlights include recital debuts at the Chicago Cultural Center, Los Angeles County Museum of Art, New York’s Carnegie Hall, Seoul Art Center in South Korea, and the world premiere of Paul Dooley’s Concerto Grosso for Piano Trio and Strings co-commissioned by Trio Céleste and Chamber Music | OC. Winners of the prestigious Beverly Hills Auditions and the recipients of the 2017 Emerging Artist Award from Arts Orange County, the ensemble has performed hundreds of recitals worldwide also appearing in master classes, entrepreneurship seminars, and performance residencies at some of the nation’s top academic institutions and centers for arts and culture. In 2014, the ensemble was selected from over 500 applicants to be Artists-in-Residence at The Grand Canyon National Park.

The ensemble was inspired to take its name after their very first meeting in New York City, where a rare celestial occurrence – the largest harvest moon in two decades – marked the beginning of their tenure together.