This chamber music event is SOLD OUT! 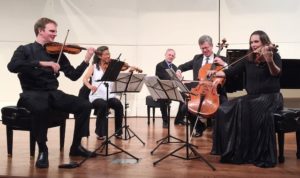 With this chamber music event, Roy Bogas will pass the baton over to another long-time favorite musician, Peter Wyrick. Following the concert, there will be a reception to honor Roy’s 16 years of artistry as part of this summer festival. The concert is Sunday, July 25 at 2:00 p.m., and is scheduled for Gualala Arts’ JAMI Amphitheater, a beautiful outdoor setting adjacent to the Arts Center.

Pianist and longtime local favorite Roy Bogas, who has guided Gualala Arts’ Summer Chamber Music Series for 16 years, will welcome cellist Peter Wyrick as he succeeds Bogas as the guiding force of the annual event. Bogas is a pianist of international renown with a long and distinguished career. He debuted in performance with the San Francisco Symphony at age 14, made his conducting debut with Prometheus in 1976, became the accompanist for violinist Yehudi Menuhin at age 19, and established a solid reputation as a pianist, conductor and composer. In addition to his work with the Gualala Summer Festival of Chamber Music, Bogas is also the founder and director of the MasterGuild Series of professional chamber music.

Born in New York to a musical family, Peter Wyrick began studies at the Juilliard School at age eight and made his solo debut at age twelve. He has served as Associate Principal Cello of the San Francisco Symphony, and has been principal cello of the Mostly Mozart Festival Orchestra and associate principal cello of the New York City Opera Orchestra. As a member of the Ridge String Quartet, he recorded the Dvořák piano quintets with pianist Rudolf Firkušný, an RCA recording that won France’s Diapason d’Or and a Grammy nomination..

In addition to Roy Bogas, piano and Peter Wyrick, cello, the July 25 afternoon of music will feature Mariko Hiraga Wyrick, cello, Amy Hiraga, viola, and Mayumi Wyrick and Sarn Oliver, Violin. The program will include Vivaldi’s “Cello Concerto in b minor”, and Dvorak’s “Piano Quintet Op. 81 in A major”.

This special event has sold out.