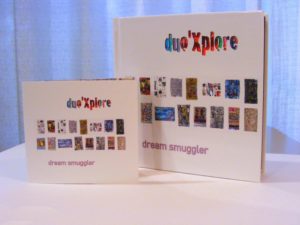 Two Mendocino County-based musicians, Harrison Goldberg and Tim Mueller, who perform and record under the banner of Duo’Xplore, will make an appearance at the Dolphin Gallery in Gualala, Sunday, May 30 from 12:00 p.m. to 2:00 p.m. The visit is part of a launch effort for the group’s special new release titled “dream smuggler”. The CD and Artbook come packaged together as a set, and can be purchased at the Dolphin Gallery. This is an opportunity to meet the artists, pick up the new album/art package, and have Goldberg and Mueller autograph copies of “dream smuggler”.

This new audio recording unites two extraordinary musicians in the studio, and brings a unique visual component as well. In short, the new album “dream smuggler” is a feast for both the ears and the eyes. Goldberg is known for his ability to move effortlessly through multiple instruments, including his tenor, alto and soprano saxophones, along with his recently acquired Roland AE-10 G Aerophone wind synthesizer. Mueller brings his extraordinary musical talents to the recording, selecting from a variety of guitars and other instruments. 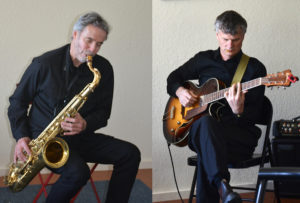 With his trademark tools of musical expression in hand—the saxophones and the Aerophone—Harrison Goldberg is a familiar face having performed in local venues up and down the northern California coast. He’s also heard on numerous recordings, many of which are available on CD. In addition to his considerable musical talents, Goldberg has also become a recognized talent in the world of abstract art in the Dadaist tradition (an early-20th-century international movement in art, literature, music, and film).  He’s designed wine labels, has written music education workshops, and has been a mentor for young musicians. Goldberg has received awards for his visual art pieces which have found their way into some corporate and private collections worldwide. He’s an alumnus of the famed Berklee College of Music in Boston, and has been playing saxophone professionally since the age of 17.

Tim Mueller is a talented and respected musician, often seen and heard performing in Mendocino and Sonoma County. He’s also created a unique recording environment at his rustic Studio Oisette in a remote corner of Mendocino County. Mueller enjoys building his parts of a composition from multiple elements. He’ll often combine organic drums with electronic rhythm tracks, and then add live electric bass, guitar, some keyboard, maybe wind chimes or perhaps more synthesized sounds, all available to “loop” into the recording/performance. On stage he makes the musical performance seem effortless, and it becomes difficult for the audience to realize just where his fingertips end and the instrument begins. Mueller added, “My friend, Marion Drake had just heard ‘Ruby, My Dear’ [a 1945 composition by Thelonious Monk] and I sat next to her on the piano bench on a Summer Sunday, the first time she played it for anyone. Changes a person forever when you hear Thelonious Monk like that!”

The launch of “dream smuggler” will kick off on Saturday, May 29 at 5:00 pm on KTDE/The Tide Community Radio, at 100.5 FM Gualala, when Erin and John of “Celtic Coasting” will debut the band’s music on their popular radio program. (There will be an encore presentation of the album on the following Wednesday at 6:00 pm on KTDE’s Mendonoma Music program.) Then the festivities move to the Dolphin Gallery and Gift Shop in Cypress Village on Sunday, May 30 at 12:00 p.m., with a ‘Meet the Artists’ and autograph signing event. The CD and Artbook come packaged together as a set, which will be available for purchase at the Dolphin Gallery.

Gualala Arts Executive Director David “Sus” Susalla added  “I am so proud of our local artists finding safe ways to collaborate with each other and presenting a product that is new, creative, inspiring and hopeful. A throw back to the days of the all immersive concept album that brings sound and vision together, helping you feel the love and spirit that these two artists put into this endeavor.”