A Chamber Music Concert with Music by Ravel and Stravinsky

A link to the Zoom performace now available!

Click here for the Zoom link for our free presentation  Today.

Thanks to sponsors we are able to offer this concert today for free. Donations welcome with quick easy link at bottom of page.  THANK YOU!

The Gualala Arts Chamber Music Program continues in March with guest artists Wyatt Underhill, violin, and Robert Howard, cello. The online! only concert is set for Sunday, March 14, 2021, beginning at 4 pm. Join us. Below you’ll find the link to connect to the free Chamber Performance.

The planned program will include the “Suite Italienne” by Igor Stravinsky, and “Sonata for Violin and Cello” by Maurice Ravel. Both pieces were (initially) written in Paris in 1920—pretty unusual! Stravinsky’s music first appeared as the ballet score to “Pulcinella”. He later arranged the same music multiple times, including this rarely performed version made for Jascha Heifetz and Gregor Piatigorsky. Both highlights from the Parisian 20’s, this is the musical backdrop to Woody Allen’s “Midnight In Paris”. Stravinsky, Diaghilev, Ravel, Picasso, Chanel, Satie, Matisse, and Cocteau all lived there, knew each other, and fed off each other’s work—a concentration of talent and innovation unlike any before or since.

Wyatt Underhill joined the San Francisco Symphony as Assistant Concertmaster in 2018. He was previously assistant concertmaster of the Baltimore Symphony, substitute concertmaster with the New Haven Symphony, and associate concertmaster of Symphony in C. He has won top prizes in the Irving M. Klein International Competition for Strings and the Minnesota Orchestra Young Artist Competition, and has performed as soloist with the Milwaukee Symphony, Concord Chamber Orchestra, and the Oberlin Orchestra, and in recital at the Kennedy Center in Washington DC and the Gualala Arts Center in California. He is the founding first violinist of the award-winning Blue Hill String Quartet, with whom he has been a fellow at the Norfolk Chamber Music Festival. He is a graduate of the Oberlin Conservatory and the Juilliard School. 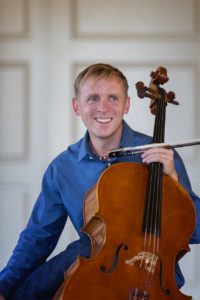 A graduate of Rice University and San Francisco Conservatory of Music, Robert Howard also attended the Accademia Chigiana in Siena, Italy and the Sandor Vegh Academy in Prague. Howard won first prize in the Rome Festival Competition and received grants from the Maggini and Virtu Foundations. He has performed in the Festival Internacional de Musica in Costa Rica, the Festival de Guadarama in Spain, and on the Mostly Mozart series in Lincoln Center. Locally, he has performed with American Bach Soloists, New Century Chamber Orchestra, Philharmonia Baroque, and the San Francisco Symphony. A regular guest on many Bay Area chamber music series, Robert has also made concerto appearances with BARS Orchestra and Stanford Symphony. A passionate teacher, he has made three trips to Kenya, where he taught and performed. He has coached at San Francisco Conservatory, Stanford University, San Jose State University, San Francisco State University, and the Conservatorio Superior Coruña in Spain.

Click to Enjoy the concert again or for the first time.

Gualala Arts Center has been the home of the annual Chamber Music Series. In a typical season Coleman Hall would be filled with the sounds of great music performed by world-class musicians. We’re pleased that, until we can once again present the musicians in concert at Gualala Arts Center, amazing musicians can continue to bring world-class Chamber Music to our community. Please make plans to “attend” this concert via Zoom on Sunday, March 14.

If you’d like to support the Chamber Music Program at Gualala Arts, why not make a donation now? It’s simple.

Our Chamber Music program committee is working to create safe events to a device near you. Check our website for updates, or better yet, sign up for our weekly newsletter, eSketches.