A Winter’s Evening with Wind in the Wires 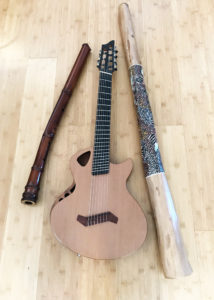 A unique and thoughtful sensory experience comes to Gualala Arts.

A unique and thoughtful sensory experience is coming to Gualala Arts for a performance on Sunday, December 22, at 4 pm. Wind in the Wires presents “A Winter’s Evening with Wind in the Wires”.

Throughout history, people of the northern hemisphere have celebrated the Winter Solstice as a profound turning point in Earth’s journey around the Sun: the moment when light is renewed within a period of deep darkness, of natural quiet, of openness to the night sky.

This concert presents an opportunity to deepen our experience of this transitional moment and celebrate the Sun’s immanent return. Wind in the Wires is: Karl Young, shakuhachi; Janet Debar, didgeridoo & spoken word; Chris Doering, 7 string guitar & gizmos. The trio’s music is grounded in the didgeridoo, developed by Australian aboriginal people about 1500 years ago. Improvised elaborations on the drone draw on traditional forms from Japan, India and Europe as well as modern jazz. The concert will express seasonal themes with the sounds of wind blowing through bamboo and of nylon strings vibrating in imaginal spaces, as well as poetic verses that speak to the time of this. We hope to surprise everyone, including ourselves.

“For makers of modern western instruments, the definition of ‘beautiful tone’ focuses on uniformity of sound,” Karl Young points out. “The shakuhachi embraces a different concept that encompasses a much broader range of timbral characteristics, which opens up greater expressive possibilities for the player who can assert some degree of control over them. I have of course been influenced by many great players who forged their own very individual accommodations with the difficulties and inconsistencies of the instrument. Within the Western tradition, I have been attracted to composers and improvisers who explicitly use timbre as an expressive resource, notably Sun Ra, Ornette Coleman, Morton Feldman, Pauline Oliveros and Toru Takemitsu.

The didgeridoo also embodies a broad set of timbral characteristics that beautifully complements the shakuhachi. Coming from a background in western music, I find improvisation with melodic and harmonic structures important, and the seven-string guitar as the third element of the ensemble perfectly fulfills that mixture, while adding intriguing sonic texture of its own.

“So there’s lots of sonic character available from these three instruments,” Karl continues. “But more importantly, my partners are accomplished musicians and attentive listeners. Those abilities make for really exciting, open-ended explorations. Janet’s deeply moving poetry adds an extra-musical dimension that provides an even larger canvas for Wind in the Wires performances. I really look forward our appearances. Our audiences appreciate the excitement of spontaneous live creation with deep roots in a globe-spanning range of musical and spoken word traditions.”

“As a student of jazz, I love Western harmony and all the complexities that have developed over the three centuries since Bach’s Well-Tempered Clavier,” says Chris Doering. “But music that explores melody and rhythm based on static drones is far older. There’s an elemental quality to drone-based music that I feel is particularly appropriate for this time of year. As a player, the challenge is to maintain continuity and to create and resolve tension without relying on some of the common devices that are available with multi-voice harmony. Although you will hear simultaneous notes from time to time on my guitar, they’re not really “chords” in the Western harmonic sense, more like a textural element than anything that implies some sort of harmonic direction.”

“Wind in the Wires is special to me because of the communication that takes place within the music. Interactive improvisation is based on each of us listening to everything that’s going on, and being willing and able to do whatever’s necessary to support and enhance every moment.”

[Note: although Winter officially begins on Saturday December 21 at 8:19 PM, Sunday will be just as short, with 9 hours, 27 minutes and 5 seconds of daylight. The sun will rise at 7:28 AM and set at 4:56 PM, near the midpoint of this concert.]

Karl Young is a physicist who has been studying and performing on the shakuhachi for more than 20 years, both as part of his Zen practice and as a musician. He has studied with Yoshio Kurahashi, Karu Kakizakai, Riley Lee and Philip Gelb among others. As a former saxophonist, Young is one of a handful of players who seek to establish a voice for the shakuhachi in jazz by discovering its sweet spot as a vehicle for improvisation. He works and performs with groups of musicians on taiko drums, koto, shamisan and other flutes, as well as in modern ensembles like Wind in the Wires.

Chris Doering has been practicing guitar since seeing the Beatles on Ed Sullivan in 1963. Between 2013 and 2016 he attended Guitar Circle courses and performance projects with Robert Fripp. At that time he began exploring the 7 string tuning used by the late great Lenny Breau. “The extra string is above the standard six,” he explains, “allowing for denser chord voicings, and sustaining tones while moving voices above – more like the piano, my first instrument. The nylon-string guitar that I use with Wind in the Wires has a little bit of koto timbre, which complements the shakuhachi well.”

Janet DeBar has been reading and writing poetry since her childhood in Beech Bottom, West Virginia, long before she took up the didgeridoo. She studied English at the college of Wooster in Ohio and at Stanford University but hopes that these experiences have not made a lasting impact on her poetry. She began reading her poems to audiences when she moved to the North Coast about seventeen years ago. Her work appears in Wood, Water, Air and Fire, the Anthology of Mendocino Women Poets. Janet has recorded several albums as part of the world music ensemble Cloudfire.