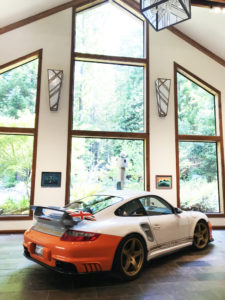 In July much of Gualala Arts is focused on the upcoming Auto Show, a fact not lost on visitors walking into the Arts Center and seeing two Porsches in the lobby, and Porsche images (and more) by Ralph Jackson in the Burnett Gallery. An opening reception is set for Friday, July 12, from 5:00 p.m. to 7:00 p.m. at the Arts Center. The reception is free and open to the public. The exhibit will continue through Sunday, July 28, 2019.

The Porsche-themed exhibit in the Burnett Gallery (along with the two cars in the lobby) immediately provide the observer with the connection of both the world of Porsche cars and the world of fine art. The lines, colors and textures of art can be readily seen in the cars.

Acclaimed local nature photographer, Gail Jackson, explored outside her usual subjects to create these car images at the request of her father-in-law, Porsche enthusiast Ralph Jackson. A Mendocino native, Gail’s remarkable bird photos have been featured online and in the Independent Coast Observer by Mendonoma Sightings,

and her images of local bald eagles have been exhibited at Gualala Arts Center during Art in The Redwoods event in 2018.

Ralph Jackson’s devotion to the notion of speed and beauty comes together in the exhibit titled “Porsche Psychosis: gearheads & mad scientists”. The exhibit includes the history of local builder and driver Jackson and the team at Sharkwerks, the business built around the Porsche. Sharkwerks is owned by long-time Porsche enthusiast Alex Ross (Sharky) and mechanical wizard James Hendry, successful entrepreneurs Joan Wood & Daniel Kennedy, all of whom live, breathe, own and drive Porsches.
View more of Gail Jackson’s work on Facebook & InstaGram @gailyimages.