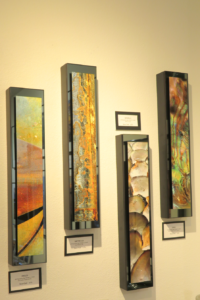 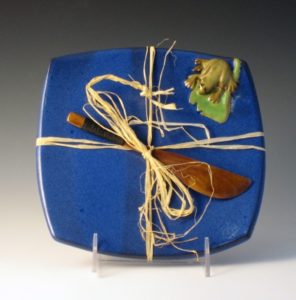 Two Mendocino County artists will be featured in June at the Dolphin Gallery in Gualala. The Dolphin Gallery will host an opening reception on Saturday, June 1, from 5 PM to 7 PM. The exhibit will continue through Sunday, June 30, 2019. The reception is free and open to the public.

Since transitioning from the high-tech environs of Silicon Valley with his move to Gualala , Steve Chell has continued his transitioning within the art world. His first successful venture began with sales of his Mixed Media Mirrors at The Dolphin Gallery, and it continued for several years that included three shows as featured artist at The Dolphin. 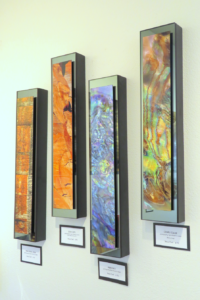 His current show planned for The Dolphin in June will include a few mirrors “for old times sake,” says Steve.  But the bulk of his show will feature his abstract photographs in several different presentation styles. His most popular in recent years has been his 3″ X 18″ dye-infused photographic prints on metal that are adhered to a strip of gray mirror, then to a wood base that extends the piece 2 1/2″ from the wall.  He also will have a variety of his abstract prints framed and matted.

Not a trained artist, Steve entered the art scene through photography.  “Yet, I had always wanted to create something not being done by others,” he says.  “So my first effort in that direction was to build something out of wood and mirror.  That led to my mixed media mirrors that utilized different colors of mirror and varieties of textured glass.”  Eventually, he combined his two art forms by incorporating strips of his abstract photos into his mirrors.

His focus now is entirely on the photographs that feature fascinating shapes, textures, colors, and the play of light and dark.  These beautiful elements are everywhere we look … but, perhaps more accurately, they are where we seldom look. Steve points his camera at these special places to capture their hidden beauty.  He calls it “painting a picture in pixels.” His work is at the Panache Gallery and Artists’ Co-Op (both in Mendocino), the Elk Collective, The Dolphin, and the Nimbus Gallery in Ashland, OR. 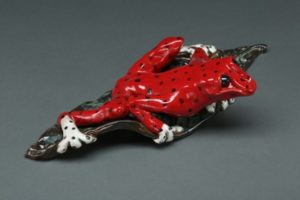 been her studio since 1988. This June the Dolphin Gallery will feature  this ceramic artist’s Mediterranean blue pottery with her signature frog and gingko-leaf motif. As Moyer says, “I like people to smile when they look at my work. When I see that smile I feel like something special has been shared. I like to make pieces that stand-alone, a favorite mug or serving piece, as well as working in combination with my other pieces to complete a dinner table.”

Moyer is often asked why she uses frogs? What do they symbolize? “While frogs have many symbolic meanings my favorite is that frogs represent transformation and change. Their journey from egg to polliwog to frog reminds me to keep growing and changing, to continuously dive into fresh creative waters.”

After beginning college majoring in architecture Alexis became interested in pottery and subsequently transferred to California College of the Arts in Oakland, CA studying under Viola Frey and Art Nelson. She then had the opportunity to study Minoan and Mycenaean pottery and architecture in Crete, Greece. It was an experience that strongly influenced her forms and also developed her love of intense colors.

Moyer’s studio in Philo is open daily by coincidence or by appointment. “I thoroughly enjoy meeting the people who collect and enjoy my work. As a ceramic artist, being able to share a mutual enthusiasm for pottery with people from all over the world has been a very special and rewarding experience for me.”