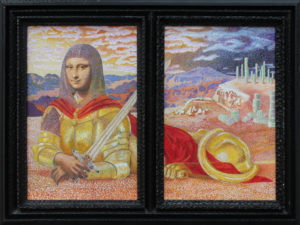 Richard Weiss is a French-born Northern Californian artist expressing himself through different art forms. His art will be on display during June at Gualala Arts. The opening reception is Friday, June 7, from 5 pm to 7 pm. His work will be on display through Sunday, June 30, 2019.

Weiss recently won both Best of Show and Most Popular awards which was a first in the 57 year history of the Art In The Redwood juried show, the largest of its kind in Northern California with his 3-D reverse perspective painting “Tintin & The Case Of The Purple Orb”. He also won 13 movie awards for his sci-fi feature film “The Book: They Came From Inner Space.”

He reunited with known solo musicians from 4 continents to create his conceptual album “Dedicace”, a precursor to world music, and also wrote the soundtrack to director Alejandro Jodorowsky’s movie “Tusk”.

Richard Weiss shares his time between Paris and the Mendocino coast, influenced by both cultures in his paintings. His work expresses humor toward the idiosyncrasies of our society. It comments on social and cultural issues by staging icons, symbols, and elements of popular culture into unexpected surroundings and situations. It is as if the characters had stepped into another reality. The work is whimsical, full of joy and wonder.

The overall experience in Richard Weiss’ exhibitions remains one of surprise and playfulness. In this upcoming solo exhibition in the Elaine Jacob Foyer, Richard Weiss will present both his 2-D and 3-D work in acrylic-on-wood.

These interactive optical-illusion paintings engage a playful participation from viewers of all ages. Each and every gallery visitor has invariably spent time “playing” with them. The attraction comes from the fact that viewers become creators, designing their own and unique experience of transforming an image into another.

Wine for our art events provided by Seebass Vineyards.

Additional Support for this exhibit was provided by the Whale Watch Inn.

Additional Support for this exhibit was provided by the Hotel Breakers and Vue Coastal Kitchen.