Yakutia Culture: Sharing the Stories, Songs, and the Food of Sakha Culture

The Global Harmony Series Presents a Performance by Saina, and Discussion with Vera 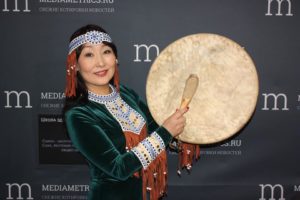 Gualala Arts announces a Global Harmony Series event: A Yakutia Cultural Evening With Vera and Saina, Thursday, May 16, 7:00 pm at the Arts Center. The evening will include a presentation by Vera and discussion about Sakha traditional worldview and Sergeh Tuhulgete,  located at the Gualala River Regional Park. This will be followed by a concert of Siberian ethno-singer Saina (Savvinova Ekatherina Arkadyavna) an indigenous person from the Republic of Sakha (Yakutia), Russian Federation.

Saina has mixed heritage of native Siberian people—Sakha and Evenk—and has represented the culture of her ancestors all around the world. She is an Honored Artist of the Republic of Sakha, Russia, and her performances are seen all over the world. Saina is a unique vocalist, who performs with traditional musical instruments like the Khamus (jaw harp) and a drum, and her repertoire range from traditional ethnic music to jazz.

people that she learned directly from the elders while traveling with concerts in the most remote parts of her homeland. These songs are very diverse and could be dedicated to important events, rituals and could be also a part of everyday chores of life as well. They were carried by the Siberian indigenous people for centuries and were passed down from generation to generation, from mothers to daughters. Saina met with elders, talked to them and asked them to sing to her and to teach her their songs.  She repeated after them over and over again until words and music of that ancient song got the same intonations and the same tone that it had in elders’ singing. Saina not only carefully keeps traditional way of singing but also keeps authentic sounding for the most songs and uses traditional musical instrument like a khomus, a drum and other instruments, her ancestors used.

Vera is a Sahka tribal member living in Washington DC. Vera is studying at the George Mason University focused on how indigenous peoples preserve and develop their cultures and traditions in a contemporary world. Vera is working closely with the Anthropology Department of the American Museum of Natural History (AMNH) in New York and indigenous people from Republic of Sakha (Yakutia) to study and bring forward the Siberian collection that was collected during the Jessup North Pacific Expedition (1897-1902).