Musicians from the Valley of the Moon Festival 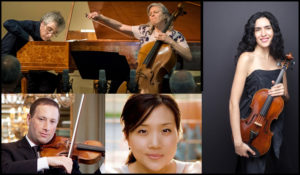 Valley of the Moon Music Festival brings the unique sound of Classical and Romantic chamber music on period instruments to audiences in Sonoma and beyond, and expands the horizons of up-and-coming chamber musicians in our Apprenticeship Program.

After many years of exploring, performing and recording the chamber music of the Classical and Romantic periods on period instruments, founders Tanya Tomkins and Eric Zivian have come to the conclusion that these well-known pieces can be experienced in a completely new way, not only through the unique qualities of period instruments but also through a full understanding of period style. Tanya began to appreciate this many years ago in the Netherlands, where she studied and performed, when she heard a very familiar Mozart symphony performed on period instruments by the Orchestra of the 18th Century.

Approached in a style more Baroque than modern, the piece came into an entirely new and fascinating light. The historical instruments took care of many of the balance problems that can arise playing on modern instruments, while bringing out the humor, charm, and poignancy of the music. The April 14 program is scheduled to include chamber music by Haydn, Beethoven, and Schumann. The Haydn and Beethoven pieces will be performed using a period fortepiano.

Mr. Stone was born in Chicago where he studied music with Hilel Kagan. At age 16 he attended Tanglewood where he coached with Eugene Lehner of the Kolisch Quartet and played in an orchestra under the direction of Leonard Bernstein. Mr. Stone went on to pursue musical studies at the Eastman School of Music and the Cleveland Institute of Music. He spent 20 years as a founding member of the Cypress String Quartet.

Ms. Lee made her solo debut with the San Francisco Symphony at age 16 and has since appeared as soloist with the Pacific Symphony, Macau Youth Symphony, Shanghai Symphony, San Domenico Da Camera Orchestra, Fremont Symphony, and Opole Philharmonic of Poland. She continues to perform as founding member of The Lee Trio with her sisters, cellist Angela Lee, and pianist Melinda Lee Masur.

Ms. Bhasin started honing her musical skills at the age of four. Through experiences as an adolescent performing and collaborating in places like Japan, Israel, China, and at the United Nations, she realized what a powerful connecting force music could be in the world. She relishes collaborations across genres and has toured the US as a soloist with legendary rock band Jethro Tull and performed Persian music as a soloist with the New York Philharmonic.

For the past ten years, Eric and Tanya have immersed themselves in Classical and Romantic music on period instruments: recording, performing, and teaching these pieces from an historic perspective. They have dedicated more and more of their time and attention to fostering students’ development by coaching, mentoring and featuring them in a house concert series. That led to the idea of starting a music festival devoted to performing and teaching this repertoire on period instruments. Valley of the Moon Music Festival is not just an exciting series of summer concerts in the beautiful town of Sonoma, but also a place for emerging musicians to thrive as they incorporate this chamber music into their professional lives.