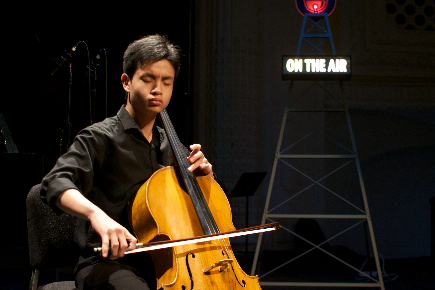 Cellist Jeremy Tai has been recognized as an emerging artist of fierce energy, musical sincerity, and dynamic colors. At 19 years of age, he has already appeared with the Utah Symphony, Symphony Parnassus in San Francisco, the Palo Alto Philharmonic Orchestra, the University of California at Davis Symphony Orchestra, and the California Youth Symphony Orchestra. Mr. Tai made his solo debut at the Junior Bach Festival in Berkeley, California at age 10 and his national debut at the Music Teachers National Association Convention in New York City at age 14. In March 2015, Jeremy Tai was named an ambassador of the Doublestop Foundation.

Mr. Tai is an avid chamber musician, having most recently collaborated with violinist Joseph Silverstein at a benefit concert at the Meadowmount School of Music in Westport, New York. Additionally, he has appeared at Sid & Mary Foulger International Music Festival and Music@Menlo Chamber Music Institute. Mr. Tai is also one of the founding members of the critically acclaimed Konpeito Cello Quartet. In February 2015, the Konpeito Cello Quartet collaborated with cellist Matt Haimovitz and internationally best-selling children’s author Cornelia Funke on the renowned syndicated NPR radio program From the Top.  Mr. Tai also appeared on the From the Top program as a featured soloist collaborating with pianist Christopher O’Reily.

Accompanying Jeremy Tai is pianist Dmitriy Cogan. Mr. Cogan began his music studies at the age of six at the Central Music School in Moscow. In 1974, he immigrated with his family to the US and settled in San Francisco, studying conducting at the San Francisco Conservatory of Music and continuing his piano studies with Vladimir Pleshakov and Maria Cisyc. In 1979, he moved to New York to study with Martin Canin at the Juilliard School, where he received Bachelor and Master of Music degrees.

Jeremy Tai plays on a 1920 Caressa and Français cello.