“A Lifetime of Art in Shirley McVoy’s Garden”

Shirley McVoy was constantly creating.  For over 40 years as a north coast resident, McVoy’s palette encompassed not only oils, acrylics, watercolors, and found objects, but also gardens and building projects.  McVoy never sought to be a professional artist, instead working for the joy of creativity and the personal challenge of exploring new techniques and subject matter. When she moved last year to her native Michigan, 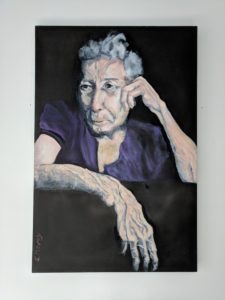 she left a trove of undiscovered treasures, including roughly 150 paintings along with many other expressions of her creativity.  The Dolphin Gallery is proud to share a sample of her work with her local community.

Shirley McVoy was born in 1926 and grew up in Grand Rapids, Michigan.  She received her sociology degree from the University of Michigan at Ann Arbor, and then her first career was as an executive with the Girl Scouts in various regions of the

United States.  In 1974, she visited the Mendonoma coast on vacation and fell in love with a parcel of land on Highway 1 near Anchor Bay.  She moved the next year and began creating her home. She built her house and various outbuildings almost single handedly and maintained large gardens.

For four decades McVoy’s days were structured around morning work, a mid-day meal, afternoon projects, and evening reading.  During the summer, the days were consumed maintaining the gardens, chopping wood, and tackling new construction projects (over the years McVoy built a house with multiple additions and renovations, a guest-house, garage, workshop, winery, greenhouse, art studio, even a swimming pool).  During the winter there was more time for her art work. She attended local painting classes taught by Judith Greenleaf. In addition to painting, McVoy also enjoyed gaining skill with many other materials, for example working with leaded glass or glass mosaics. Her creative passion often took on a more whimsical focus, emerging from her life as a builder and using her shop tools and excess materials.

Because Shirley McVoy created art by choice and with no burden of professional necessity, she was free to experiment and try out new media, 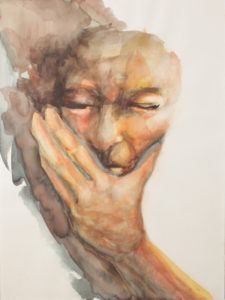 styles, and subject matter.  Each of her artistic seasons seemed to represent an exploration of a given idea, and after achieving success with some set of works she would move on. The Dolphin exhibit represents samples from four collections: paintings of people and garden, and found object miniatures and collage landscapes.

In her portraits McVoy used bold, intuitive approaches to probe the internal psychology of human experience.  She was interested in imperfection, in the stories etched into wrinkles, and in a raw, unflinching exploration of emotion.  She was fascinated to discover how these could be evoked in paintings: varying use of light and dark, partial figures with negative space, realistic poses vs. distorted or even somewhat abstract caricature.  In one major series she portrayed elderly people, probing both the beauty and the internal experience of aging. In another series she explored her own emotions through both realistic and abstract watercolor self-portraits.

McVoy’s life as a gardener was reflected in her many paintings of flowers.  Like the portraits, these often similarly confront the viewer with something more complex or subtle than mere garden beauty.  Most of McVoy’s canvas works portrayed flowers from a variety of perspectives – a whole garden scene, one variety blooming in abundance, or the detail of just a few individual specimens. Her home and garden were also featured in smaller watercolor and pastel works. 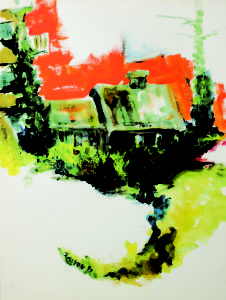 ’s most astonishing found-object art projects came from a happenstance opportunity, the luxury of time, and “why not?”  When her cement fish pond sprung a leak and needed to be repurposed, McVoy produced a major opus of installed art, appreciated firsthand only by herself and a few close friends.  She transformed the pond into a diorama of a river bed adorned by a miniature western town — buildings, covered wagons, horses and all. Many of the figures from that installation are included in the Dolphin exhibit.

McVoy’s last major work was a series of creative collage landscapes.  The collection expressed well her passion to experiment with whatever seemed to her to be interesting and fun.  This found object art brought together her history as a painter with the common materials of her garden and workshop.

As much as Shirley McVoy loved her gardens, her home, and her routine life, she recently decided that having reached her 90s the time had come to stop feeding her own wood stove for winter heat.  In 2017 McVoy moved back in her native Michigan. It is a privilege to share McVoy’s heart-felt art with her local community in the Dolphin Gallery.  More of her work is also available at www.shirleymcvoyart.com.