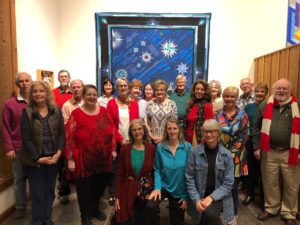 Under the new direction of Sue Bohlin, the Coastal Singers will welcome the winter Solstice and prepare for the season with a program called Solstice Christmas on Friday, December 21, 7 pm at the Gualala Arts Center.

Twenty-five coastal devotees of music and poetry will present a palate of Seasonal melodies –  with passports from Palestrina, Italy (Sicut Cervus), and from the pagan heritage of Estonia comes the spell casting music of Urmas Sisask (Heliseb Väljadel) who bases most of his compositions on astronomy.  From the Republic of Georgia (Racha region) comes an ancient call to Christmas;  and from Chile – what has become the national song in times of triumph and grief: Gracias a la Vida.  From 1982 England comes a song by Howard Blake, who says that Walking in the Air is about opportunities and childhood innocence, and was selected by NASA to be the soundtrack for time-lapse sequences by the Expedition 30 crew aboard the International Space Station.

Then, with a new take on Tradition, the Coastal Singers will give you a taste of Chanukah (in Santa Monica) by Jewish American political satirist, Tom Lehrer, who turned 90 this year; a White Christmas (though we’ll settle for lots of rain!) by the Russian-born American-Populist-Musical genius, Irving Berlin; and sung poetry by English poet, Sally Hawkins on the theme of astronomy should compliment the evening sky.

Sue Bohlin and Bob Geary are part time Anchor Bay residents and work together and independently in the Bay Area, most

and inspiring singers. Both are classically trained and lifelong students of music. The two Directors are hoping to spend more time in Anchor Bay within the next few years.  They live on boats in Sausalito and travel together each summer with a group of 40 to 50 accomplished, prize winning singers of middle and high school age.This summer they will perform in Finland and at the Laulupidu (Song Party) in Estonia, the birthplace of Sue’s mother. They are both happy to have Gualala Arts Center and the Coastal Singers in their lives.

Tickets are $15 in advance, $5 more day of performance.