The Portrait – Our Stories, Ourselves 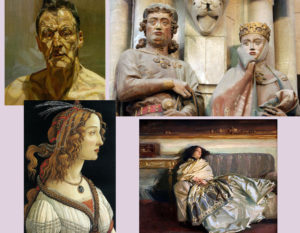 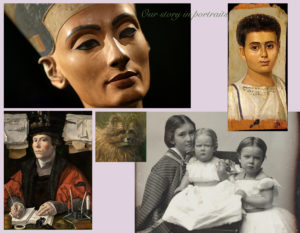 During each class, I will present a dynamic lecture with slides for about an hour, followed by a fun and informal discussion for about half an hour.

I say “dynamic” because I analyze subjects and examples in a way that relates to people’s lives, or what they can imagine one’s life would have been like in the past. We will consider the daily experience of our predecessors. How, but also why did they depict themselves in portraits? How were portraits
used? What do these answers say about society in each period? I encourage comments and questions. I appreciate understanding what someone else thinks about these images. I like to ask questions and then explore the answer.

The word for “portrait” in Italian is ritratto, which means “portrayal” but also “reproduction”
or literally, a “copy” — a stand-in for the subject. Many Renaissance portraits were cherished
portable objects, often with a special box or protective cover, and were brought out for
appreciation and even communication with the sitter, if he or she were not present. So, yes,
you might hold the picture in your hands and speak to it, even touch and kiss it, rather than
having it simply hang decoratively on your wall.

• How old is portraiture?

As early as 7,000 BC during the Neolithic period, people living around Jericho in the West
Bank practiced reconstructing the faces of their dead with plaster applied to the actual skull
of the deceased. These heads are very lifelike, with shell inlay for the eyes and painted details
of hair, mustaches, and facial features. The bodies of the dead were buried under homes, but
the “portrait” skulls were kept inside the home so the inhabitants could see and interact with
them. This is quite different from displayed portraits as we know them, but at the same time,
is also related to the Renaissance idea of “reproducing” someone no longer with you.

• Here’s a question: in a similar way, do you have more pictures hanging in your home
of family members who are far away or deceased, who you can no longer see as often
as you’d like, or ever?

Ancient Greece and then Rome were home to a rich portrait tradition in sculpture, and the
Roman occupation of Egypt inspired an especially vibrant style of painted portrait, again
associated with the dead. Mostly from the Faiyum Basin, these likenesses were painted on
wooden panels attached to the cloth wrapping the face of a mummy. They are notable for
their luminous, liquid eyes, as if the person still breathed.
First in Italy and then northern Europe, the Renaissance (meaning rebirth) was inspired by
Classical Antiquity and pulled art out from the church and into secular life. Cherished
household goods were painted along with the subject of a portrait to celebrate their world and
life. This went hand in hand with painting techniques that achieved an amazing new realism!
Think architectural perspective and oil paint that could reproduce light and shadow. Also, a
rising middle class began to commission portraits; they became more widespread. The story
of subsequent centuries is told in its portraits, humble as well as grand.

• A final question for the class: is the painted portrait dead?

Well, no, but something happened that really changed things, especially in the realm of
normal people who are born neither to wealth nor title. It began in the 1820s in France… and
by now you can do it yourself with your phone. It is the advent of photography, which
eclipsed the need to have a painter reproduce your image. So much more accurate, so much
easier! But still, the painted portrait lives. We will talk about how, and why.

“I am a painter, seamstress, graphic designer and art historian, whose residence in downtown
Point Arena is home, studio, and gallery all in one. My decorative scheme is the same as that
of manors and palaces everywhere: put art in every available space,” says local Point Arena artist and instructor, Lauren Sinnott.

Sinnott grew up in Wisconsin dairy farm country, then lived as an exchange student in beautiful
Belgium, followed by many years at Rice University in Houston, Texas, achieving her BA as
well as BFA in painting and MA in art history. she taught drawing at Rice and Art History at
the Museum of Fine Arts. After traveling cross-country with her kids in a converted school
bus in 1999, she proudly calls Mendocino County her home. Here, her other vocation has been
politics, being a long-time city council member and former Mayor of Point Arena.

Sinnott loves painting, sewing, and designing, picking edible plants in her yard, and living close to
nature. She loves intellectual pursuits and being an informed citizen with paid subscriptions to
many of top news sources. She says she depends on the New Yorker magazine for enlivening her
magical coffee hour, and believes that ignorance of history is like walking backwards into the
future with your eyes shut. The periods that intrigue her are many, but especially the Italian
Renaissance, ancient Minoan Crete and the Paleolithic era.

Sinnott’s most recent accomplishment is painting a 16 x 8 ft. mural for the Community
Foundation in their main hall in Ukiah. It depicts the entirety of Mendocino County with
geographical features, flora and fauna (including a mountain lion, black bear, gray whale, sea
otter and Seabiscuit!) You can see photos on my Facebook page here.
Her next projects are a wolf/dolphin mural for her front door and beginning her historical
novel called A Portrait of Two Men, set in Renaissance Venice. Vist her business website at
www.artgoddess.com.