“The Historic ‘California Collection’ from the California shores to St. Petersburg, Russia – The Story, The Project”

a lecture by Robin Joy Wellman and Dr. Sherrie Smith-Ferri

$5 donation at the door, all proceeds go to Kashia children's fund. 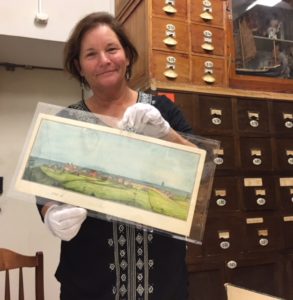 Robin Joy Wellman with a piece from the California Collection at the Kunstkamera, in St. Petersburg.

Please join Robin Joy and Pomo basket expert Dr. Sherrie Smith-Ferri, Director of the Grace Hudson Museum and Sun House, as they share personal stories and insights of the six year long project/partnership with the Museum of Anthropology, the Kunstkamera, in St. Petersburg which houses one of the largest collections of artifacts from the Fort Ross era. Robin recently retired after 27 years at Fort Ross State Historic Park where she worked with natural and cultural history interpretation.  In 2014 and 2016, Sherrie worked closely with the Kunstkamera Museum curators.  Kunstkamera Museum houses the largest collection of basketry collected during the Fort Ross era. Sherrie will share details about her work as well as personal stories growing up in and around her tribal family.

Across the oceans people came together to bring attention and voice to a 200 year old collection. Wellman’s focus will be to highlight this amazing and successful collaboration with approved tribal members from Kashaya, Coast Miwok, Dry Creek Pomo, and Southern Pomo in collaboration with curators from the Kunstkamera. Robin has presented internationally throughout Russia, Paris, and California. Her passion and dedication to the telling of the Northwest Pacific has been core to her life work.

Dr. Sherrie Smith-Ferri, Director of the Grace Hudson Museum and Sun House, is a member of the Dry Creek Rancheria Band of Pomo Indians with family ties to Bodega Coast Miwok people. She received her doctorate in anthropology from the University of Washington and has been Director of Ukiah’s Grace Hudson Museum & Sun House for more than 15 years.   Sherrie has published articles on Pomo Indian basketry and been a consultant and/or curator for various exhibits related to California Indian basketry and culture for a number of institutions including the Smithsonian Institution’s National Museum of the American Indian and the National Museum of Natural History, the University of Pennsylvania Museum of Archaeology and Anthropology, the Crocker Museum, the Arizona State Museum, the California Indian Heritage Center and the Heard Museum. She has served on the Board of the Council for Museum Anthropology and currently serves on the Board of the National Collaborative of Women’s History Sites. Her father, William V. Smith, first saw some of the California Indian material in Russia more than 30 years ago. She has been fascinated by these pieces of culture washed ashore so far from home ever since seeing his slides after his return to northern California.

All proceeds will go to Kashia children’s fund.