Located on the beautifully landscaped grounds of the Gualala Arts Center, this is a car show you can actually stroll through, talk to the owners and appreciate each car, truck or motorcycle for the piece of art it is.  The tenth year marks a special anniversary and planning has already started on this much anticipated event!

Thanks to our many 2018 Auto Show Sponsors!

And our many in-kind RAFFLE donors! 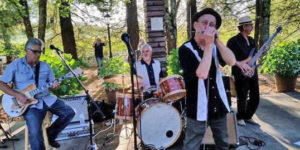 Entertainment at the 10th Anniversary Gualala Arts Auto Show will be provided by Brad Wilson and “The Rhythm Drivers,” a high energy blues band. They draw from the blues tradition to create a dynamic soul-infused style that is very danceable.  Brad Wilson’s old school approach to the blues was heavily influenced by his older brother Kim Wilson of the Fabulous Thunderbirds, but he has also had an opportunity to meet many of the great bluesmen such as Muddy Waters, James Cotton, Billy Boy Arnold, Lazy Lester and other contemporary bluesmen who have inspired him. “The Rhythm Drivers” play in the various styles of Swamp, Chicago, Delta, and West Coast blues yet maintain a contemporary sound. Brad leads the band with his soulful vocals and amplified harmonica playing to create a heartfelt style that still maintains danceability. Bring your dancing shoes!

Black Oak Catering will have breakfast ready for those early registrations! Tanya Radtkey will be offering biscuits and gravy, fresh fruit, and other entree options from 7 a.m. until the food runs out!  Black Oak Catering uses only the freshest organic ingredients and all of Tanya’s culinary delights are created with love!

Other Auto Related Happenings on the Coast!

Dirty Jack’s Drive-In Car Show! From noon to 5 pm on Friday, July 20, visit Dirty Jack’s adjunct car show at the Gualala Hotel and enjoy a hot dog and friendly auto-driven banter of the many car enthusiasts visiting the coast! Pick up your Point Arena Lighthouse Cruise the Coast discount ticket!

Point Arena Lighthouse Cruise the Coast! Sunday, July 22, 2018 from 10 am to 4:30 pm – Cruise the Coast encourages participants and guests of this unique automotive themed weekend to make the cruise up our beautiful coast to visit the iconic and picturesque Point Arena Lighthouse, and take advantage of the great photo opportunities it offers.  In past years we have had many of the hot cars from both shows park around the Tower with their owners and other visitors taking some wonderful photos, both from the top of the Tower and at the base. We also love having the guests that attend the shows get another chance to see these beautiful machines in a coastal setting after seeing them under the cool redwoods of the Art Center or behind the Gualala Hotel.  Attendees to either show will be able to pick up a ticket to Cruise the Coast that will let the holder get a Museum and Tower tour for the discounted price of $3 which is a $4.50 savings over the regular admission. For all other visitors the normal admission rates will apply.

In the Elaine Jacob Foyer, auto enthusiasts will delight in the drawings by the creative genius Rex Burnett, who was a long-time Sea Ranch resident and patron of Gualala Arts. In the postwar forties Burnett worked as a technical illustrator in the aircraft industry when he participated in the birth of the classic Hot Rod® magazine and started drawing for the publication.

The exhibit will feature his cutaway drawings done without the benefit of computers and 3-D CAD programs. These pieces have attracted attention from not only hot rod buffs but also from the art world. One of his most famous drawings is the Pierson Brothers Coupe. In 2008, the Behring Auto Museum at Blackhawk featured his work in a one-man show and some drawings were part of an exhibit at the Oakland Museum entitled “The Men and Machines of the California Car Culture.”

Gualala Arts is proud to once again feature Burnett’s works. 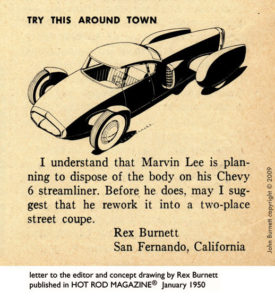 Also on exhibit will be automobilia from drag racing legend Carl “The Hooligan” Olson.  Olson was a leader in the drag racing segment of the auto racing industry for decades, including a stint as National Hot Rod Association Vice President for International Relations.

In 1946, at the tender age of 3, Olson attended his first oval track event.  Olson first drove a fuel dragster in 1964, but his greatest success on the strip came when he joined up with Mike Kuhl and by 1972 he was IHRA Top Fuel World Champion and a regular Top Fuel Dragster winner at NHRA events. He attended and participated in thousands of track events, especially ovals, throughout his impressive racing career.  A lifelong Angeleno, Olson cut his drag racing teeth in Jr. Fuel and Top Fuel, partnering with a number of teams leading up to his competitive 1969 Top Fuel ride with Bill Stecker and Jack Ewell before striking out on his own in 1971 with the Woody Gilmore-built Black Plague II car, which he purchased from Frank Rupert and Steve Pick.

Olson won the last Top Fuel dragster eliminator to be held at Lions. By 1976 he had finished his racing career and took a Vice President’s role with the NHRA.  Olson received the NHRA Lifetime Achievement Award in 2007.  His many years in the racing industry have earned him innumerable honors and trophies. Olson was owner and driver of The Hooligan dragster (pictured, right), which is how he earned his nickname.

He was inducted into the British Drag Racing Hall of Fame in 2012. 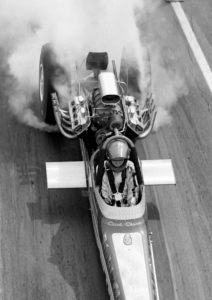 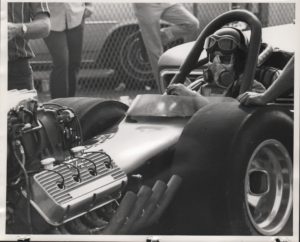 It will be a day of great fun, good food, a little music, and shared automobilia.

Go here to view last year’s auto show. Check back for details about the 2018 show in coming months.