One Universe of Light, Four Worlds of Color 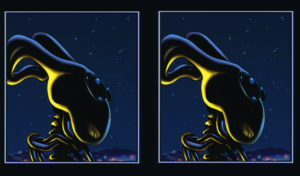 “We’re all living in our one universe of light, but I know of at least four different worlds of color.”

“I think I can explain some of them to you.” — Steve Oliff, artist 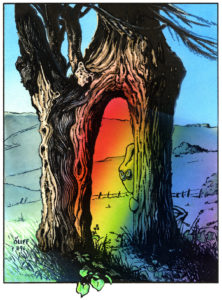 “In 1994 at the San Diego Comic-Con, I put on an exhibition called the “Color Exploratorium”  showcasing the evolution of color in comic books and color separation,” says coastally-grown artist and author, Steve Oliff, who is also owner of Olyoptics, an award-winning color separation firm in Point Arena.  “It was also a showdown between Photoshop & Codd-Barrett software (what I used to use) over several days.  Historical note: At the time, it was kind of a draw, but Photoshop rules the world today, and Codd-Barret is a footnote in a Wikipedia entry.” 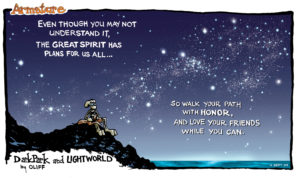 Oliff describes the exhibit as part art and part science, utilizing a series of short presentations designed to help people think about color in new ways, and learn how to “See with Better Eyes.”

“Minus the showdown, it is an extension of those (1994) ideas with 24 years more research,” he says. The show is the international debut for a traveling exhibit designed to open people’s eyes to the light and color all around them.

“It’s a lot like a mashup of the Exploratorium and an art gallery, with rotating live shows focused on different aspects of light physics, and how to apply color in art,” he says.  “The electromagnetic spectrum, RGB, CMYK and Red-Yellow Blue color primaries will all be touched on in the exhibit, showing their commonalities and their very distinct differences.”

In 1988, Oliff pioneered the evolution of flat comic book color into the digital era by using computers for color separation, revolutionizing the comic book industry.  He is known internationally as the “Godfather” of modern comic coloring from his work on graphic novels like Akira, Sandman, Spawn, Batman, X-Men, and hundreds more.

Locally, Oliff is best known for 13 years of his comic strip, Armature, in the ICO, and the history book he co-authored with Cheri Carlstedt, “The Early Days of Point Arena.” 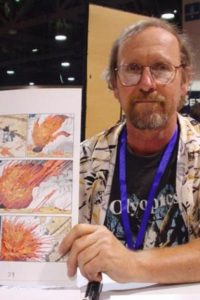 Oliff’s most recent book is “Guide Dog for the Coastally Curious”, a collection of his ICO comics that gives both locals and visitors a taste of our coast.

Along with his work in the comic industry, Oliff has taught art and color at all age levels, and has developed a new approach to understanding color. Color sits squarely at the crossroads of art and science, he says, and technology has changed painting, printing, and digital art so thoroughly that our old ways of understanding color are outdated, Oliff says.

“I call color the “silent soundtrack.” Every day it plays all around us, silently shaping our world view and our emotions.  And in order to hear it, you first have to learn how to see with better eyes. I know that sounds like a contradiction, but… That’s Color!”

“It’s light. It’s weird stuff. It’s a particle and a wave at the same time. It is the most amazing thing in the universe,” Oliff says.

There will be books, prints, paintings, Aramature original art, comics, oddities and other original art by Oliff for sale. 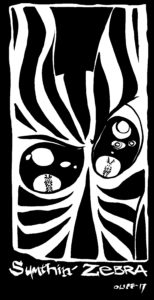