“Inspired by the Sea”, Judy Pfiefer and Walt Rush 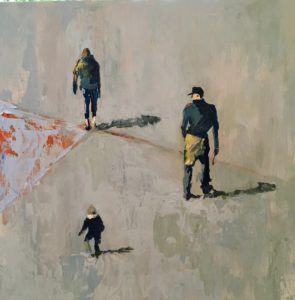 Although this is just her second exhibit at The Dolphin Gallery, Judy Pfeifer is no stranger to the local art scene.  Judy has participated in shows and received many awards at Gualala Arts over the last ten years, she has served as secretary of North Coast Artist Guild the last three years, and she has been The Discovery Gallery Artists Collective Gallery Director for three seasons.

Pfeifer describes herself as an eclectic artist who likes to explore different media and styles. However, her love of the human figure is apparent, as it is almost always a key factor within her art.  Currently, she is exploring the shapes and shadows that form from the strong light playing off of figures within beach landscapes. She observes her subject matter along the cliffs of our local Northern California coast each day as she and her dog hike its trails.

Starting with ink or charcoal studies Judy later develops her works into drawings or paintings, mostly with the use of acrylics and pastels. Digital paintings have also become a media of choice over the last few years, and she will often mix her original paintings with her photos to make unique digital collage art.

Whatever her subject matter or media Pfeifer chooses to focus first on the line, which  brings out the forms and shapes.  However, in her view, the lost line — the one not drawn — often makes the strongest statement of all. 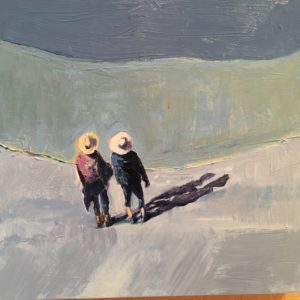 Pfeifer received her classical training at the University of Kansas where she earned her Fine Arts Degree, and she attributes this strong base for providing her the freedom to explore her artistic expression with more confidence.  After her education in fine arts, Pfeifer took her skills in various directions, enjoying a 15-year career as an illustrator and a second 15-year career as a costume and set designer.

Judy says retirement has allowed her the freedom to explore her artistic interests, coming full circle back to her beginnings.  She and her husband have had a summer home in Sea Ranch since 1999 and officially made it their full-time residence five years ago. 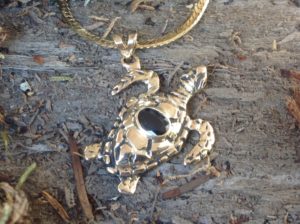 Perhaps the most frequently featured three-dimensional artist at the Dolphin Gallery, Walt Rush returns this month for his seventh two-person show in the last 15 years. Walt is a perennial winner at the Gualala Arts Art in the Redwoods Festival.  In 2017, his creation “Look to the Future” captured First Place in the festival’s Jewelry and Ornamentation Awards category. 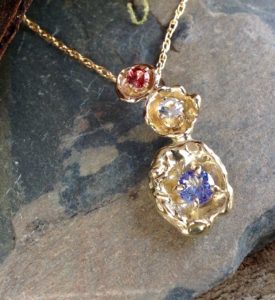 Although Walt is self-taught, he says he inherited his talent from artistic parents.  His father was an architect and his mother was a painter.  For over 30 years he honed his skills in his retail store in Ohio.   Eventually, in 2002 he returned to his Northern California roots where he took up residence in Manchester.

Mother Nature, wave motions, abalone shells or driftwood shapes often inspire his distinctive designs. He starts with an overall concept but finds each original piece evolves depending on the metals and stones.  He may carve wax designs using the lost wax process but often employs straw cast or water cast techniques as well, which he says is particularly interesting because of the spontaneity and freedom from control that results for these methods.  Walt calls his jewelry “wearable works of art”.

In addition to creating custom jewelry Walt restores family heirlooms and antique silverware.  He also repairs jewelry and can often fix broken eyeglass frames.  Whether he is making an original commission or restoring a family treasure he takes pride in offering what he calls “old-fashioned customer service.”  Every Thursday, Walt can be found at the Discovery Gallery from 10:30 am to 4:30 pm. 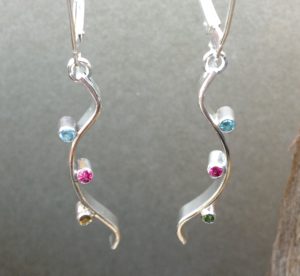 Currently, Walt is an associate member of the Gemological Institute of America, a member of Gualala Arts, the Mendocino Art Center, the Arts Council of Mendocino County, and a member and past president of the North Coast Artists Guild.  His work can be found at the Prentice Gallery in Mendocino and The Artist Collective in Elk as well as the Discovery Gallery and Dolphin Gallery.  More examples of his work and other pertinent information are available at his web page – www.rush studio.com and rushstudio.etsy.com.