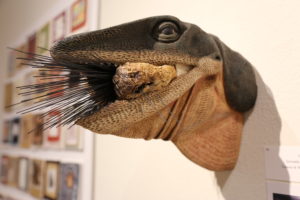 To celebrate the Salons’ fifth anniversary, this year’s reception will be a catered affair (in addition to the champagne and cake from the Let Them Eat Cake Fine Arts Decorating contest that happens on the same evening) and all the awards have been increased by 20 percent.

In addition, there will be a judging trio for this very special Salon made up of artist Karen Shapiro and art collectors April and Ronald Dammann (see bios below).

As in previous years, significant prizes will be awarded to first, second and third best art piece. With the increase, this year’s monetary awards are first prize of $1,250, second prize of $1,000, and third prize of $750. In addition, the People’s Choice awards in the Salon des Refusés were also increased to first prize of$125, second $100 and third $75. The award for Emerging Artist Under 18 years of age is $100.

We are so excited to have the husband and wife team of April and Ronald Dammann return with Karen Shapiro as a special anniversary judging trio this year’s Salon and Salon de Refusés.

Art historian April Dammann studied at the Art Institute of Chicago, UCLA, the University of Rochester (M.A., French literature) and the Sorbonne. She was a longtime member of Los Angeles County Museum of Art’s Art Museum Council, while pursuing an award-winning writing career for television, film and the stage. April grew up in Hollywood (with one stretch in Hyde Park, Chicago), the daughter of a radio/TV personality dad and a showgirl-turned-politically active mother.

Ron Dammann, president of Stendahl Galleries, and April went to Hollywood High and have been going steady, ever since. Ron graduated from the University of Arizona with a B.A. in Anthropology/Art History. His specialty is Pre-Columbian art from Mexico and Central America and, over a span of 44 years, he has developed a clientele for California impressionist paintings of the 1920s, as well as for Western artists of later periods. Active in the Los Angeles art community, Ron has served three terms as president of the Art Dealers Association of California and is currently chairman of the Ethnic Arts Council of Los Angeles.

For more than 20 years, Ron enjoyed Senior Member status with the American Society of Appraisers in fine arts. He and wife April are avid collectors; their Northern and Southern California homes are filled with art representing diverse genres and styles. For years April has written for radio, television, motion pictures and the stage. Currently she is producing plays in Los Angeles.

This year Ronald Dammann and his wife April, the gallery’s archivist, sold the historic Hillside Avenue Stendahl Galleries and property in Hollywood and moved to Mendocino County, California. In 2016, the Stendahl Galleries celebrated one hundred five years of continuous operation in Los Angeles—a remarkable feat. Three generations of dealers, have been instrumental in forging an aesthetic identity for the West Coast and beyond: a legacy of unsurpassed connoisseurship. Visit aprildammann.com and stendahlgalleries.com for more information about the Dammann’s work.

Karen Shapiro’s first recorded attempts at artistic expression were at the ripe age of 5 years or so when she painstakingly painted the adobe brick walls surrounding her house in Tucson. The records of these attempts are the scratchy old home movies taken years ago – the painted images being executed in nothing but tap water and disappearing instantly in the Arizona sun. Years later Karen majored in art in high school where she began working in clay and continued in this medium as a design major in college. After college and continuing until a couple years ago, my medium changed drastically to a more edible artform in the shape of a long, hard career as a pastry chef. Today she is out of the kitchen and back into the ceramics studio where she is finding great joy in working in a sculpture style which is new for her.

Now Karen finds herself jumping around from vegetables to nail polish bottles and lipsticks, to crayons and on and on…and in addition to these wonderful objects she has also discovered the raku kiln. The excitement of reaching into a red-hot environment with tongs, of the flaming bucket, even the choking smoke, and finding results she never dreamt of – always changing, always so much to learn – has given her back an enormous energy, appetite and passion for her work. Visit rakukaren.com to see more of Karen’s work.