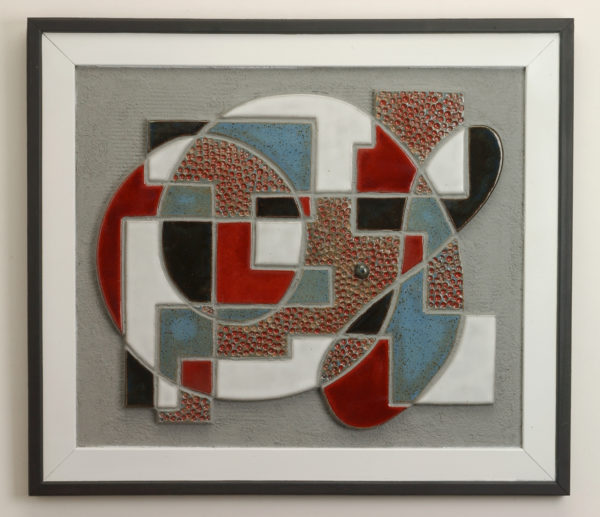 Mendocino Inland Ceramic Artist Guild, M.I.C.A., presents “Conversations in Clay,” a juried group show of its members in the Burnett Gallery.  Each artist exhibiting will be showing a body of work in his or her particular style.  These will include high-fire and soda-fired functional ware, Raku, low-fire and high-fire sculpture. The group is diverse and creating noteworthy ceramic pieces.  They look forward to this opportunity to begin conversations with fellow clay artists, the residents and visitors of the beautiful Gualala coast.

“Conversation in Clay” is an exhibit of ceramics, both functional and sculptural.  Each artist has and is developing and defining his or her current aesthetic in the body of work he or she is presenting. The group supports and encourages personal development with clay as individuals refine their skills, techniques, style and firing methods. These style differences add diversity to the group while sharing a common love of the medium.  This exhibit will include the following artists:

One member, Satako Barash, soda fires her functional ware. Her work highlights the beautiful blushes obtained by her expertise in firing her soda kiln.  These pieces would be an exceptional addition to any table setting.

Satoko Barash, native Japanese, met her husband in New Zealand.  He persuaded her to continue her art in this country, where they now share a home in Mendocino County, Calif.  Making utilitarian and artistic ceramics, Barash enjoys exploring the infinite variety of texture and color attainable through the malleable process of fabrication and firing.  She obtained her Bachelor’s Degree in Studio Art at Sonoma State University.  Barash extols the opportunity for expressive freedom in the United States.  “I like to incorporate both sculpture and utilitarian ceramics in a style of simple elegance.  I have a studio in my home and receive help and inspiration from my loving family and supportive friends.”

Doug Kell creates high-fire sculptures, often working large.  He frequently leaves the clay unglazed, highlighting the texture of the medium.  His artwork can be used as beautiful garden sculptures or as dramatic indoor pieces.

Doug Kell was born in 1946 in Claremont, Calif.  He graduated from University of Calif., Santa Cruz, in 1972.  Kell has looked for the value of his life in art, living and working on the west coast and traveling throughout the world, seeking the threads that bind humanity into one. He currently resides in rural Mendocino County.  Through sculpture of the human figure, Kell searches for the subtle harmonies and discords which create the profoundness of the human experience.

Heather Law uses earthenware slip and a black and white color palate to transform trash into slipcast ceramic sculpture and installations.  Her focus is to bring out our awareness and emphasize the permanency of our growing landfills.

Heather Law was raised in rural Northern California. In 2004, she received a Bachelor of Arts Degree from California State University, Chico. After undergraduate school, she spent several years as an apprentice at Hoyman-Browe pottery studio in Ukiah, Calif. From 2007-2009 she attended graduate school at Rochester Institute of Technology’s School for American Craft in Rochester, New York, for a Master of Fine Arts Degree in Ceramic Sculpture. Law currently resides in Ukiah, Calif, as a studio production artist and business owner. Law’s work is a social commentary on American consumerism, personal identity through material goods, and the waste that material consumption creates in our commodity culture. Her work is a tangible and direct representation of mass consumerism/waste, and her molds are a friendly reusable reminder of the importance of being aware of our carbon footprint. 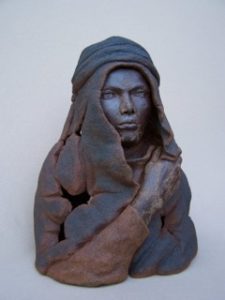 Gail Rushmore is a sculptor/hand builder creating stylized figures.  Often other mediums such as metal, wood or paper are added to her sculptures.  She calls this “post fire enhancement” since materials are applied after raku firing. Gail has shown and sold her work nationwide.

Gail Rushmore, a clay and mixed-media sculptor, attended University of Washington majoring in graphic arts.  In the following years, she worked her way through a wide assortment of mediums and styles. Her interest in ethnic design and world cultures is seen throughout her work.  Her clay career began as a lark at Mendo-Lake Community College approximately 15 years ago.  Rushmore has lived in Bellevue, Wash., the Bay Area, Sonoma County and currently resides in Redwood Valley, Mendocino County.  She has shown her work nationwide, including SOFA, Chicago, assorted national galleries and art and craft shows in San Francisco.  Rushmore prefers raku firing her clay sculptures then affixing metal, bones… as “post-fired enhancements”, adding other elements to the stories she tells.

Barbara Voohries’ work features geometrical surface design in both hand-built and wheel-thrown forms.  Her work in this exhibit will include some of her tile wall reliefs.  Barbara has been an instructor at the Mendocino Community College Ceramic Department helping others find their love of clay.

A Californian from age 5, Barbara Voorhies grew up in a beach town in northern San Diego county. Her studies in art began in 1967 as a student at the University of Calif., Santa Barbara, where working with clay became an immediate and enduring passion.  She also enjoyed sculpting in wood and metal as well as studying mycology and cellular biology. In the ‘70s Voorhies moved to Lake County to teach high school ceramics, arts and crafts, biology, black and white photography, and video production and to enjoy a rural lifestyle. In 1975, she met her inspiration and master potter Dean Stawn, with whom she studied for 20 years.   After retiring from teaching in 1998, she worked as a part-time ceramic instructor for Mendocino College both in Ukiah and Lakeport for 9 years. Barbara has three distinct styles of work: sculpture with a biological theme (animal and abstract combinations of geometric and organic shapes); organic slab forms (bowls, masks, and vases) of a more gestural nature; and, her current body of work (both wheel thrown and hand-built) that features geometric surface designs. Occasionally, Voorhies experiments with Raku, pit firing, atmospheric firing, and cone 6 oxidation firing, but cone 10-11 reduction in her 48-cubic foot updraft kiln has remained her preference.

Jacob Troester is a long-time California resident who has been working with clay since 2010. He received his Bachelor of Fine Arts Degree in Studio Art from Chico State University, Chico, Calif.,  in 2013 and is currently working at Mendocino Community College as the ceramic program’s Instructional Assistant. Troester makes both functional and sculptural objects that are often vibrantly colored and social commentary.

In the mid-1950s, Diane Clifton’s parents moved their family across the country to settle in southern California.  From an early age, Clifton was fascinated by classes in art and natural sciences.  Her first introduction to clay as a medium was at Fullerton College while obtaining a nursing degree.  She soon purchased a potter’ wheel and continued to study ceramics wherever she lived.  In the late ‘70s, Clifton and her husband and young son moved north as part of the back-to-the-land movement.  Over time there was a homestead, another child and a studio, all in the hills of Redwood Valley.  She feels fortunate to have found an art form that continues to inspire her and to also have the facilities needed to create it.

Debra Haber is a ceramic artist, formerly of San Francisco, now enjoying life in the countryside of Mendocino County, Calif.  Her work is porcelain functional ware with a sculptural twist, inspired by the mountainous landscape seen from her studio.  Her Celadon glazes and surface designs evoke ancient Persian themes.  Haber holds a Masters Ceramic Technician Certificate from Mendocino College.  She has also been fortunate to study with renowned ceramic artists from many regions in the county and overseas.  She has exhibited her work in Ukiah and venues on the North Coast.

M.I.C.A. is a non-profit organization that currently has 30 members.  It was formed to facilitate networking, education and the development of all levels of ceramic arts/crafts. An annual grant is given to an upcoming clay artist (often from the local Junior college) to further their education.  M.I.C.A.’s members are at many levels of expertise from novice to professional showing and selling artist.  Last year, the Dolphin Gallery hosted a group show of 8 of its members.  They are now glad to be returning to the Gualala coast to continue this “Conversation in Clay”.

For more information on this organization and its members, see www.micaguild.org