Gretchen Butler in a one person show of mixed media

Playing with space and time, Gretchen Butler’s paintings, dolls and installations glimpse our connections with the evolution of life forms on earth. The work’s surreal twist reminds us that carbon from stellar explosions has been recirculating for eons through seas, clouds, rocks, flora and fauna, through each of us, through every living thing, even the wood panels beneath the paintings.

The Deep Time series was sparked by a gnarled oak’s silhouette beneath a crescent-moon. Butler’s painted version shows the oak’s oxygen molecules mingling with stars. You can’t tell where the tree ends and the cosmos begins.

Her show features Mariana Trench sea cucumbers slouching in muck for 6-9 million years. They are youngsters compared to pelicans that have been gliding off-shore for 30 million years. Reaching further into the dim past, Neon Dream melds millions of years on a single surface with fanciful stromatolites turning Earth’s early atmosphere from murky gases to blue sky. 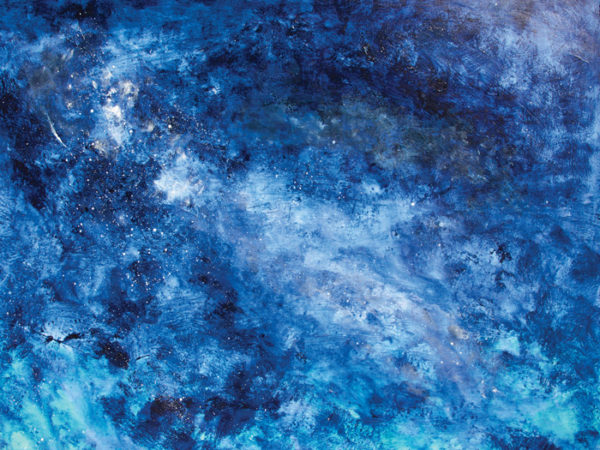 Butler’s painting process is messy. Images emerge in a dream-like fashion from goopy, chaotic gobs of pigment smooshed with hands, textured papers, plastics, fabrics. Scratching through layers of paint is sometimes spontaneous, sometimes meticulously precise.  Although paint is thrown, slopped, or arranged with split second decisions, Butler studies hap-hazard blobs and marks for hours, days or months before deciding what to cover up, which areas to transform, tweak or reinvent.

Beginning with a vague notion, she has learned to enjoy the drama of not knowing the outcome, not knowing what to do next. Staring with “soft eyes” rather than critical scrutiny opens new possibilities. Colorful design and varied textures evoke feelings, surprises, questions. 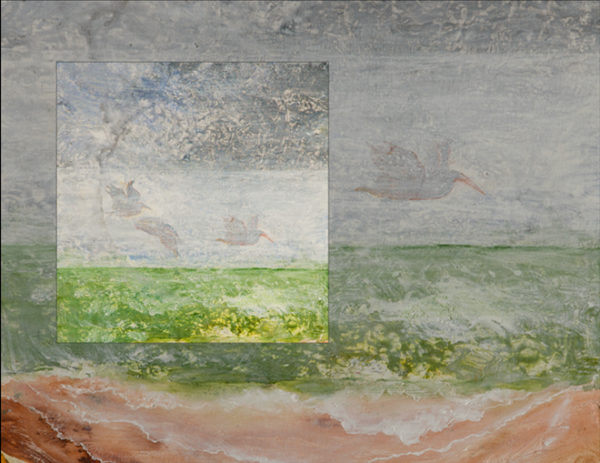 Fabric-wrapped dolls have accompanied Butler’s paintings since her first solo show 25 years ago. Describing herself as a B- seamstress, Butler allows odd tucks and gathers to inspire angles and stances. Lena’s steel wool hair-do design accentuates her tilted posture, Vera’s full of beans and Compostella’s stuffed with dried compost. Unique, sculptured dolls tend to “make themselves” as Butler cobbles together recycled materials. 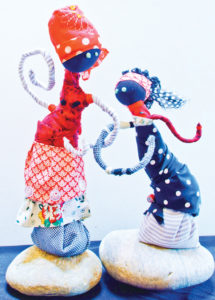 Butler and her husband came to Sonoma County’s wild lands by way of fire and ashes. The 2003 Grand Prix wild fire in Southern California devastated their home and retirement plans. Starting over as off-the-grid homesteaders became a grand adventure. While living in the forest without shelter for the first summer, Butler translated experiences into small art works, many of them reproduced in her memoir Wild Plum Cafe. The book’s cover art was painted beneath the wild plum while jays and woodpeckers dropped plums on her head and paper.

Butler explores her life-long timid relationship with the wild, natural world in  vignettes paired with color reproductions of original art on every page of  Red Canoe Camping and Hiking Poems. 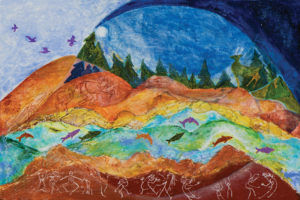 Butler’s latest publication, Rock & Root, A Three-year Journal for Gardeners, has 24 color reproductions of original art. A companion set of note cards are in Dolphin Gallery.

Butler participates in events at Gualala Arts and Sebastopol Center for the Arts on a regular basis.