“Shoulder The Lion” redefines what is possible not only for its film subjects but for the entire documentary genre. A film that excites the senses and challenges its audience to answer for themselves what it takes to persevere through uncertainty and loss.

Alice Wingwall and Donlyn Lyndon, who reside on The Sea Ranch, appear in this award-winning documentary directed by Erinnisse and Patryk Rebisz. The film follows three people who have lost the very sense that defines their art, but they refuse to cease living and instead choose to live courageously. Please come for this rare screening event and stay for a post-screening discussion with the film’s subjects and makers.

“Pushing boundaries of the film medium,” this visually-rich film essay explores meaning of images, fragility of memories and desire for relevance in today’s world. Enter into the worlds of three artists who have lost the very sense defining their art.

A photographer who is blind questions the power of images in today’s visually saturated culture. Forced to give up his dream of playing music due to his advancing hearing loss, a musician must reinvent his future. A painter who lost half her brain in a boxing match searches for her place in life, unsure of what she should be to the world.

“Shoulder the Lion” attempts to ask what it takes for someone to keep on going, in times of uncertainty and uses unique form to produce the answers.

“Shoulder the Lion” has 14 awards. 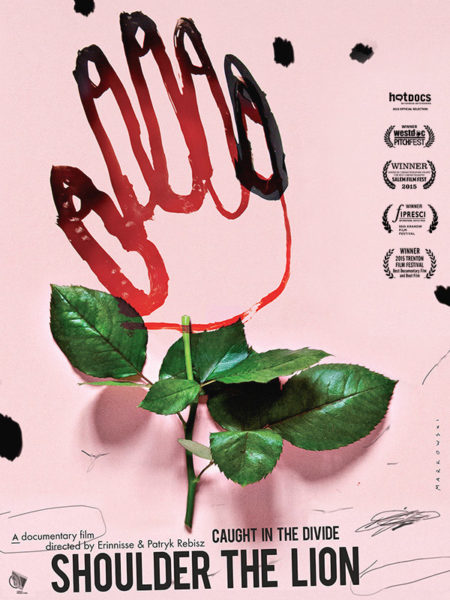 Shoulder the Lion has played in over 20 countries in North America, South America, Europe, Asia and the Mid-East.

Erinnisse Rebisz, is a seasoned editor for television and film, born and based in New York City. Her credits include numerous unscripted television shows and documentaries such as “What Not To Wear” and “Imagination Unleashed – An Artisan’s Journey.”

“Madonna of the Mills,” a feature-length documentary edited by Erinnisse premiered on HBO in 2011 and was nominated for a Genesis Award for Best Television Documentary.

Rebisz studied at a Buddhist university (Naropa) majoring in media studies and the human experience. “Shoulder The Lion” is her debut feature as a director.

Patryk Rebisz, from Poland but residing in New York City, is a Director/Director of Photography. He has shot and directed hundreds of various productions, almost a dozen feature-length films, numerous music videos as well as commercials and television shows. Patryk’s short film “Between You and Me” has garnered him worldwide awards and recognition for its innovative use of still photography.

Patryk studied painting at the prestigious Cooper Union School of Art before exchanging paintbrush for camera. “Shoulder The Lion” is his debut in a role of a feature-length director.

Zeberiah Newman has appeared on hit shows such as “Brothers and Sisters” and “House” and attended the prestigious Juilliard School of Drama. Seven years ago Mr. Newman transitioned his career to behind the scenes working in development and on location as a field producer. Now based in Los Angeles, he’s working for “The Ellen DeGeneres Show.”

Alice Wingwall lives at The Sea Ranch and in Berkley, Calif. In the year 2000, Alice lost her sight after decades of genetic retinal degeneration. Through that period she had a career as a sculptor and photographer with work installations around the United States and the French countryside.

With the complete loss of her physiological vision, Alice turned more to photography and committed herself to it as an artist. Blindness has taught Alice how misleading “seeing” can be. The question “Do images still have meaning?” plagues Alice. If they don’t, what does that mean for someone who finds images to be a vital part of her existence?  Alice’s search goes beyond her disability. She understands that images define our past — it is powerful images we most remember. If we don’t value images, then we end up living in a vacuum with no past — only the present.

Katie Dallam is a painter/sculptor who’s lost half her brain in a boxing match and with that her self-censorship as an artist. The film “Million Dollar Baby” is inspired by her story. Katie searched all her life for a place in the world. She earned a degree in art but didn’t see it could help her earn a living. She enrolled in the Air Force yearning for structure and discipline and was stationed in Arizona. After she was discharged, she went back home to Missouri. She enrolled in the university and became a psychologist. Soon after this, her mother died. To deal with her grief she started to paint watercolors of the vibrant desert landscapes she had come to love during her time in the military. Behind these colorful images, she was concealing her feelings of loneliness and loss. Seeking a physical outlet for her emotions she took up boxing.

Katie’s first pro-boxing match was her last. After 140 punches to the head, she was taken to the hospital unconscious. After a week in intensive care, she was admitted to a rehabilitation center. She was stripped of her memory and ability to care for herself. She spent the next 12 months relearning everything including learning how to walk and communicate. Hopeless, she became suicidal. In desperation, her sister took her to an art class where Katie finally flourished. Art became Katie’s language and gave her a reason to live. Although her injury destroyed everything she had spent her life working for, Katie came to recognize that her injury had also benefitted her. One of the most devastating residual disabilities from her injuries was also one of its greatest gifts – she no longer had the ability to plan too far ahead or to censor her emotions.

Graham Sharpe is an Irish musician who can’t play music anymore because of his advancing tinnitus. He describes his condition as static noise on a TV channel with no reception. The noise is so overwhelming he’s scared to end up in a mental institution at 40 or 50 and would gladly accept it instantly being ten times worse for knowing that this is the final line.Since the age of sixteen he found his calling in life: to play music. Four years ago everything changed for Graham with the development of his disability. He knows that the thing he loves the most – the music – is also the cause of great pain. He’s had to give up on his dream of playing in a band, touring, making the next record but he still wants to be involved with making music. As of late, Graham feels a maturity in his songwriting. He is consoled by knowing that at the very least he can sit quietly in his room and write music with an acoustic guitar.

Deteriorating economic conditions of his native Ireland motivated Graham and his friends to organize an annual music festival, Knockanstockan. In a few short years, it has grown to significant proportions. In 2012 Knockanstockan was named the best independent music festival. Proud of his achievements with the festival he still feels jealous of the performers longing to be back on a stage. It frustrates him that just when he finally has the perspective and experience to say something meaningful through music, he can’t take that message to the big stage. Dissatisfied with just writing the music, Graham is in the process of finding what his future holds.

Tickets are FREE!  But for planning purposes please make a reservation.

DVDs will be for sale at the performance as a fundraiser for Gualala Arts.