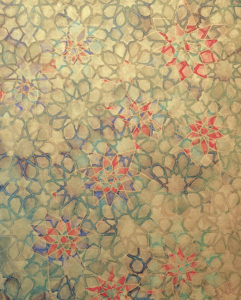 In her first two-person show at The Dolphin Gallery two-dimensional artist, Manjula Dean, has assembled a collection of paintings that draws on the aesthetic traditions of South Asian painting and textile art to reflect her lifelong study of yoga philosophy and her interest in Hindu, Buddhist, and Islamic traditions.

The works in this exhibit are inspired by geometric motifs such as Islamic tiled patterns, shamsas (sunbursts), and yantras (devices for concentration). “I’ve always loved the beauty and optical effects of complex geometric patterning, and I’m equally fascinated by its cross-cultural symbolism. In my own work, I’ve been using geometry to explore the polarity of conceptual structure and organic chaos,” Dean said.

Dean is a patient painter who works primarily with oils because their slower drying times allow her to rework concepts for longer than other paint mediums allow.  She says, “I paint slowly and change my mind a lot.  I definitely wipe off as much paint as I apply. I like working with thin, translucent layers of paint which I find a bit easier to make luminous with oil.” 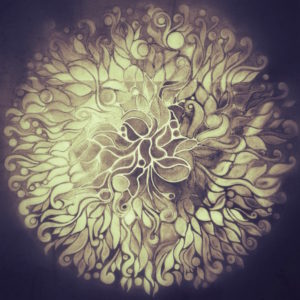 In addition, she often photographs her paintings before digitally manipulating and printing them on canvas. She then works back into the new canvas.  She takes advantage of photo apps to allow her to quickly see variations in elements such as color and contrast that would be time-consuming and awkward to produce on the actual canvas.  Sometimes, the effect might lead her in a completely different direction from the original intention or inspire a new painting altogether.

Dean has a Bachelor’s degree in Studio Art from UCLA. She started her own photography business and worked in several design fields over the years.  In New York she started another business as a designer and wholesaler of textile products from India where she lived and worked for several years.   There she learned from both miniature painters and textile artisans.

Dean moved to Gualala from Oakland in 2007.  In the last five years she has been a full-time artist and member of the North Coast Artist Guild (NCAG). Dean has shown at The Dolphin Gallery in a life-drawing group show, and various works at Gualala Arts exhibits since 2012.  She received a People’s Choice award at the 2013 Salon des Refuses and Second Prize at the NCAG show, “Shameless” in 2014.  She has been selling her art and accepting commissions for both private and commercial spaces since 2013. View more of Dean’s work at manjuladean.com.

The tradition of basketry predates written history, but in this show at The Dolphin Gallery the Gualala Arts Basket Makers (GAB) apply ancient skills in innovative ways, combining craft and art form to transform ordinary materials into extraordinary collectible pieces.

This is the third show at the Dolphin Gallery for this group that began as a 2005 class in pine needle basket making at Gualala Arts.  In 2007, long-time director Gerda Randolph organized the first Dolphin Gallery show and set up regular meetings for the group. Members gather once a month, usually on the second Thursday, for demonstrations and to share ideas about techniques, materials, and design and to develop new concepts, solve technical problems, and provide encouragement.

Designs range from weaving with traditional grasses, corn husks, pine needles, kelp or other organic materials to an array of found or manufactured items.  One of the delightful aspects of these baskets is how members incorporate and assemble materials in surprising and creative ways.  The definition of what constitutes a basket is liberally interpreted, so artists are free to explore a myriad of possibilities.

The Gualala Basket Makers are affiliated with the Bay Area Basket Makers Guild which has shown at Gualala Arts since 1994 and will be showing in the Burnett Gallery in January, an example of how this art form has wider appeal that includes national and international involvement.

Randy Agee, current director and curator of this exhibit, says the guild welcomes anyone interested in learning more about this artistic outlet regardless of their background in basketry. No prior experience is required, just an interest and a creative imagination.  For further information contact Randy Agee by emailing agee@mcn.org.

About some of the artists:

Barbara Fast is the Founder of the Coast Highway Art Collective gallery on Main Street in Point Arena.  After retiring from the medical field in 2007, Fast developed an interest in basket making.  Recently, she has become interested in botanical printing, a process of transferring images such as leaves and even rusty metal onto wool or felt, which can then be made into baskets.  Fast is a member of the Gualala Arts Basket making group and also the Bay Area Basket Makers.

Jim Shanower, former resident of Anchor Bay, Calif.,  began studying pine needle basket weaving under Gerda Randolph and Anne Westwater at the Gualala Art Center in 2006. His baskets have won awards at the Gualala Art in the Redwoods and art shows and fairs in Washington. He continues to weave baskets and teaches basket weaving at various venues in the Lacy, Washington, where he moved in 2012.  He is a member of the Northwest Basket Weavers Guild and the National Basketry Association.