A documentary by Jeff Lieberman 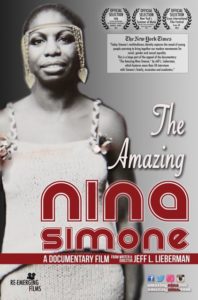 Much beloved and often misunderstood, the story of America’s most overlooked musical genius is finally brought to light in “The Amazing Nina Simone.” Director (”Re-Emerging: The Jews of Nigeria”) takes audiences on Nina’s journey from the segregated South through the worlds of classical music, jazz joints & international concert halls. Navigating through the twists & turns of the 1960s fight for racial equality, the film delves deep into Nina’s artistry and intentions, answering long-held questions behind Nina’s most beloved songs, bold style, controversial statements, and the reason she left America.

“She was left out of Civil Rights history, erased by jazz critics, and forgotten by most Americans because no one knew how to categorize her greatness,” says Lieberman.

But throughout the 1960s, Nina Simone was both loved and feared for her outspoken vision of Black Freedom. Her musical proclamations like “Mississippi Goddam”, and her iconic style created an alternative voice that continues to empower with its unrelenting appeal for justice. Now, Lieberman’s documentary reveals the real Nina Simone through over 50 intimate interviews with those who best knew the artistry and intentions of one of America’s true musical geniuses charting her journey from classical music and the segregated American South all the way to the south of France where she finally found freedom.