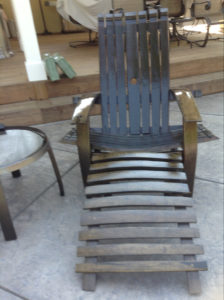 Their signature product is the Claflin Chair.  Loosely modeled on the classic Adirondack chair the Claflin Chair is redesigned for comfort and there is also a rocking chair version and a side table designed to fit between two chairs.  Other items in this Dolphin show include cook book racks, candle holders, and charcuterie plates.  Several new designs for items currently in the prototype phase may also be included.

Starting with mostly locally sourced barrels of American and occasionally French oak, Bob Claflin reworks the wood to suit his particular need.  The wine aged in the barrels imparts a particular patina that resembles the color of merlot wine.  Sometimes he leaves the original labeling on the finished product.  Finally, he applies a protective coat of spar varnish or uses an ebony lacquer finish.

Since good wineries use a barrel for only three to five years there is an abundant supply of raw materials.  As a co-founder of Earth Day celebrations at the San Francisco school where she worked Roxanne Claflin especially appreciates that these barrels are not discarded but are re-purposed and continue to have a useful life.

The successful business with a healthy backlog of work began almost by accident when Roxanne received a tray as a birthday present.  After using it for a while she thought she could improve on the design.  Her husband, a do-it-yourself woodworker, turned her concept into a superior product.  When friends requested trays for themselves Claflin Creations was born.

Most local residents associate the name Peggy Berryhill with Gualala’s own non-commercial public broadcasting station KGUA 88.3 FM, which she co-founded six years ago and where she hosts the popular Peggy’s Place program.   What they may not know is that Berryhill is an avid photographer whose work is on display in this first two-person Dolphin show of 2017. 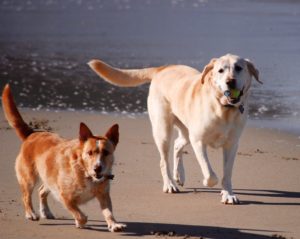 Although she has been a nationally known radio journalist and print media producer for over forty years, Berryhill’s first interest was in photo journalism. Since her arrival in Anchor Bay more than twelve years ago, she has honed her skills with mentoring from some of the area’s fine photographers including Marian Patterson, Ron Bolander, and Sharon Nickodem.

Her photographs have captured landscapes in the many places her work has taken her and have appeared in some area publications such as Mendonoma Sightings and in Gualala’s local newspaper, the Independent Coast Observer.  However, this showing of her work emphasizes a completely different aspect of her photographic skills – her ability to depict dog culture, dogs at play, dogs just being dogs.

Berryhill discovered a talent for portraying the personalities of man’s best friend by accident.  While carrying her camera on relaxing walks in the woods or along area beaches, she started capturing dogs at play in the surf, interacting with other dogs, documenting the language of their expressions or just showing them joyfully romping along a sandy beach or at play in a yard or park.  Much of her early dog photography was distributed to friends and relatives in a yearly calendar, and in a series of (very silly) dog cartoons. 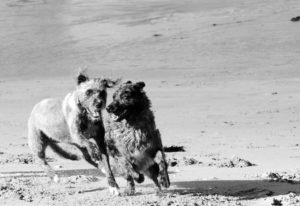 After she posted her work on Facebook, many dog owners approached, requesting pictures of their pets.  They praised the way she captured that magic moment every serious photographer strives to achieve.  Berryhill’s avocation has become a passion which she enjoys sharing with others.  “I love seeing the absolute joy that dogs express when they are free to be with each other, just being themselves, communicating in their own body and voice language – the invitation to play, the chase, leaping, rolling , running, respecting the order of the pack.”