The March, 2016, exhibit at the Dolphin Gallery features Bruce Jones and Dean Thompson. The opening night reception is on Saturday, March 5 from 5 p.m. to 7 p.m. and the show runs through Monday, March 28.

Returning to the Dolphin for his third two-person show, Bruce Jones guarantees that his watercolor, ink and colored pencil works will be both original and interesting. Each piece reflects his fascination with shape whether found in a seascape, the human body or even a motorcycle. The only requirement for his subject matter is that it captures his imagination. 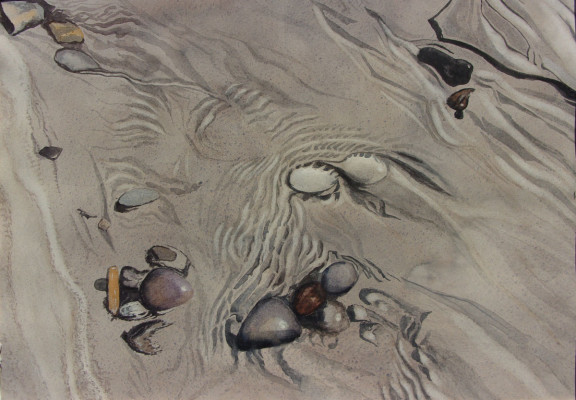 Jones recently has been captivated by the patterns he finds as he walks along the beach looking closely at the textures and contours of the sand and the seaweeds that wash up on the shore.  But he can also take a more panoramic perspective.  Whatever catches his eye is fair game for his palette, including a rusted pickup, a distant mountain range, or a model in a life drawing session.

Although Jones has experimented recently with more mechanical subjects, he insists on drawing freehand without the assistance of what he calls “store bought” tools – rulers, protractors, or other drafting tools that might control the line. He seeks to be more spontaneous and not programmed. 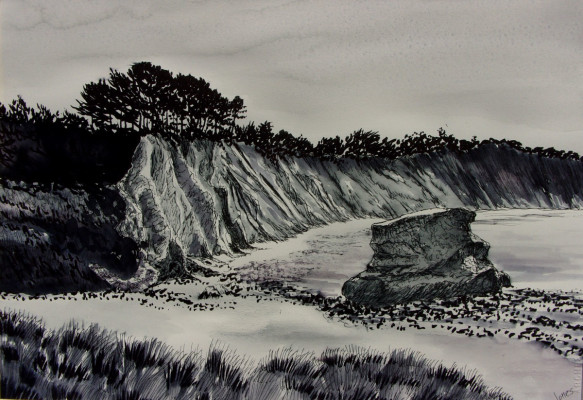 He claims his interest in art is inherited. His father took up painting when in his 60s and his mother and grandmother were both lifelong painters. Jones became more serious about painting in 1987 when his mother told him to take a break from a strenuous career in computer systems and join her on the Oregon coast for a workshop with Oregon artist Bill Kucha.  Over the next ten years the two attended three more workshops together.

Now retired in Gualala, Jones is quite prolific and paints daily.  He is a fixture at the Gualala Arts Center where he chairs the hanging committee at the annual Art in the Redwoods Fine Arts Exhibit.  He exhibits at the Artists’ Collective at Elk and at the Upstairs Gallery in Gualala’s Seacliff Center.  He participates in the annual Studio Discovery Tour and can be regularly found at the art center life drawing sessions. 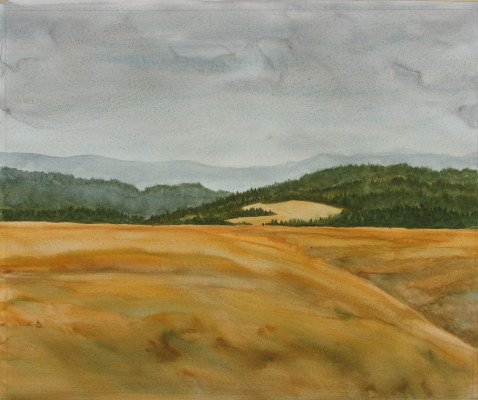 Stimulated by what he finds on his trips around the world, Dean Thompson once more offers a potpourri of creations that are both artistic and useful. His decorated furniture, pots, concrete sculptures, and handmade journals have all won awards at the annual Art in the Redwoods show since he first entered them in 2004.

He attributes his artistic inspiration to watching his Gramma Daisy weave on her gigantic loom when he was a small boy. Her weaving combined both aesthetic creativity and practical application. It is also a craft that has ancient roots. These influences are clearly seen in this show. 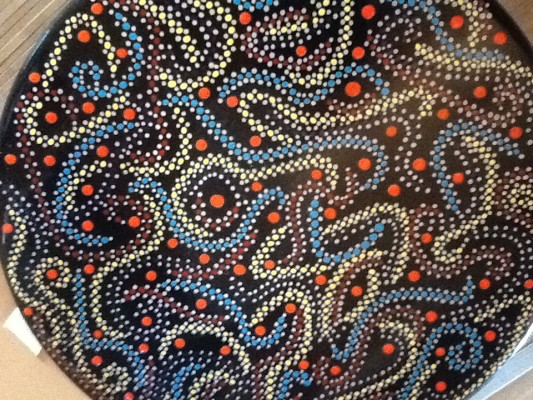 Thompson’s most easily recognized creations are his furniture decorated with colorful dots. In his travels he noted recurring patterns of dots, first on Mexican souvenir “animales” but also from Australia in aborigine “dreamtime” paintings and body art. Once he looked, he found more dots recurring throughout the world. Soon they appeared on pieces of furniture he had collected and refurnished.

His pottery using primitive hand built slab techniques and the clay masks draw on ancient motifs. In addition, his hand sewn award-winning books filled with an assortment of handmade papers collected from Egypt, Peru, Guatemala, and Southeast Asia may inspire any journalist.

His most recent artistic venture is creating concrete sculptures using a technique he learned from classes at the Mendocino Art Center. He leaves the finished work in its natural state or painted.

The common threads in Thompson’s eclectic offerings in this show are the influence of human’s earliest efforts at artistic expression on practical objects, and the use of materials found on his travels. After retiring from a career in Sacramento he and his wife Laura reside in The Sea Ranch. 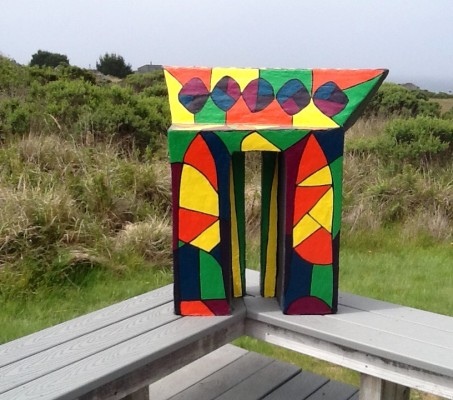