The Gualala Salon is made possible by the notable donations by
Jack Chladek, Sharon Nickodem, and other generous sponsors.

It’s one of the most famous quotes in history. At some point around 1789, when being told that her French subjects had no bread, Marie-Antoinette (bride of France’s King Louis XVI) supposedly sniffed, “Qu’ils mangent de la brioche” – “Let them eat cake.” 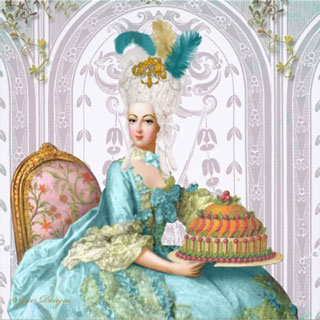 With that callous remark, the queen became a hated symbol of the decadent monarchy and fueled the revolution that would cause her to (literally) lose her head several years later. But did Marie-Antoinette really say those infuriating words? Probably not. But we don’t really care, because for this year’s GUALALA SALON, there will be no hors d’ oeuvres! We will all eat cake and drink champagne!

“How can this be?” you ask. And here’s the answer: This year, in addition to the Fine Art Competition of the Gualala Salon, there will be a separate Fine Art Cake Contest. Artists will be encouraged to create Fine Art Cakes that will be judged on their artistic merit, not on their taste. First Prize will be $250, Second Prize $175 and Third Prize $100. Attendees at the opening reception for the Gualala Salon will then get to eat the cakes and wash their cake down with free champagne. All artists are invited to create a Fine Art Cake for this opening reception exhibit. Fill out a “Let them eat cake!” registration form and submit to Gualala Arts.

And that’s just the “warm up” act. The “main event” as always is the Gualala Salon & Salon des Refusés. The Gualala Salon exhibit is a juried and judged fine art show. The purpose of this exhibit is to showcase outstanding visual art and artists without regard to the type of media. Three prizes for artwork in the Gualala Salon will be awarded by the judge as follows: First Place $1,000, Second Place $750, Third Place $500.

Artists will deliver their work to the Gualala Art Center on Tuesday, December 1, 2015 between 10:00 a.m. and 4:00 p.m. All work submitted will be juried by the judge into the Gualala Salon (accepted work) or the Salon des Refusés (rejected work). Accepted work will be exhibited in the Burnett Gallery and will be eligible for the First, Second and Third Place awards. Rejected work will be exhibited in the Elaine Jacob Foyer and elsewhere throughout the Gualala Arts Center, and will be eligible for the People’s Choice Awards of $100, $75, and $50. Every visitor to the exhibition will be asked to vote for three favorite pieces in the Salon des Refusés. In this way, all art submitted and all artists will be represented in the exhibit, either in the Gualala Salon proper or in the Salon des Refusés. In addition, there will be a special Judges Award of $100 for the best work by an artist under eighteen years of age. Fill out a “Gualala Salon” registration form and submit to Gualala Arts.

Some historical background on Salons and the Salon des Refusés:

The original Salon des Refusés – Salon of the Rejected – started in Paris in 1863, following protests by many artists that the hanging committee of the French Academy had been too restrictive in its selection of work for the annual Salon. In that year the Academy rejected 2,800 paintings submitted for the exhibition. Artists, including Manet, Pissarro, Courbet and Whistler, were rejected from the ‘official’ exhibition because their works were considered by the committee too subversive and some even thought that these artists posed a danger to society.

In those days exhibiting in the Salon was one of the only means artists had of marketing their work therefore exclusion from its annual selling exhibition threatened their reputation and livelihood. Works rejected by the Academy in 1863 included Manet’s Déjeuner sur l’Herbe, a painting now considered a masterpiece. Eventually to quell the furor the emperor Napoleon III came to view the rejected works and then asked the committee to reconsider its selection. When they refused, he decreed that the public be given the opportunity to view them in a rival exhibition and a tradition was born.

Brian Fuller—Art Dealer, Creative Manager, Curator and Exhibitions Consultant—is a resident of Sonoma County, currently residing in the Petrified Forest plateau in the hills above the Napa Valley.

With completion of a formal Liberal Arts education focusing on Design and Interior Architecture from Pacific Union College, and a keen eye for detail, Brian held early aspirations to become a production designer in the film industry. Instead, through many fortuitous events, he found himself grounded in the Bay Area and seamlessly entered the “art world” in the mid-1990s.

His 22+ years of exclusively representing Bay Area Figurative painter Ira Yeager has afforded him the great pleasure of cultivating valuable relationships with leading gallerists and museum staff across the country, as well as participation in the planning and execution of numerous successful solo and group exhibitions. As collateral to these exhibitions, he has also had the opportunity to oversee and be the publisher of multiple fully illustrated catalogues.

One of his great joys, and part of his daily responsibilities, is to continue to manage and operate Ira Yeager’s famed San Francisco Shotwell Street gallery. The ability to cultivate and sustain meaningful relationships through the avenues of an artist’s vibrant, primary and secondary markets is especially rewarding to him. Brian enjoys client/collector relationships immensely, and finds great personal satisfaction in the curatorial process and exhibition design.

In recent months, he has begun to work closely with regional healthcare facilities, consulting with their administrations to help cultivate art programs and their corporate collections.

He has curated and installed two previous exhibitions at the Gualala Arts Center, expressing great respect for its mission as a North Coast creative center, and the tireless commitment of staff and volunteers.

Brian is honored to participate in the judging of 2015 Gualala Salon and Salon des Refuses. He looks forward to the opportunity to review exceptional works inspired by this region, and to meet the artist’s that choose to make the North Coast home.

udge for the fine art cake competition “Let Them Eat Cake!” is none other than Jennifer Arana, the former owner/operator of Let Them Eat Cake, previously based in Gualala. At Let Them Eat cake, Jennifer made special order cakes for weddings, birthdays, anniversaries, and other occasions.

She created all types of cakes, from simple and elegant with fresh flowers, to extremely ornate with extensive handmade decorations. She could mimic almost any magazine or web picture, or design a personalized, on

e of kind cake. And she paid as much attention to the inside as she did to the outside. She believes that a cake is only wonderful as it is delicious!

Every element of every cake she made was fine tuned to her own picky taste and the final result was both lovely to look at and heavenly to eat. Who better to judge a fine art cake competition?