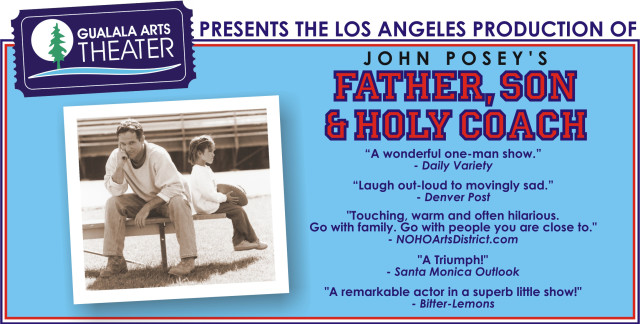 Gualala Arts Theater presents the critically acclaimed one person show, Father, Son & Holy Coach, a father-son story that goes slightly off the rails and asks the question, “Are we defined by our past or by our present and our future?” That said, it’s a comedy. The show just completed an often sold-out, 6 week run in Los Angeles. Writer and star John Posey is donating his performance and producer Drew Fagan will donate ALL net proceeds to Gualala Arts, KGUA-FM and Redwood Coast Medical Services (RCMS). 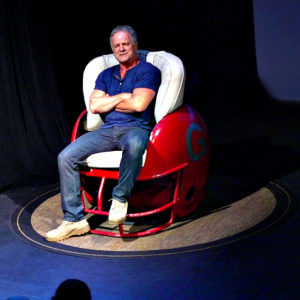 Posey is currently a recurring cast member of the popular TV series How to Get Away With Murder on ABC and has guest starred in dozens of other shows including a starring role in Tom Hanks’ hit mini-series, From Earth to the Moon. He is also a screenwriter and his film Legendary, starring Danny Glover and Patricia Clarkson, received a 4-star rating from nearly 700,000 viewers on Netflix. John is also the father of Tyler Posey, the star of the MTV global hit series, Teen Wolf.

The Los Angeles Times called Father, Son & Holy Coach “funny and absorbing.” It is a poignant, timely story about a man’s boyhood relationship with his father/football coach and his life thereafter. CBS Radio said, “Posey brings to life eighteen characters with the kind of elasticity and specificity reminiscent of the late Robin Williams. It is a beautiful thing when an actor disappears before your eyes…and a well-defined character suddenly appears. It is an absolute joy when it happens many times over throughout the play. Such is Posey’s skill, that you almost forget it is a one-man piece.”

Fagan and Posey have been friends, and occasionally writing partners, for over 20 years and Fagan produced the play in the late 1990s for a two night performance in Atlanta. This will be its only presentation until its performed next in January on the Queen Mary in Long Beach, CA.

This is a show for everyone – Moms and Dads, teenagers, football fans and “football widows.” It is often riotously funny and at other times will bring tears to your eyes.

Gualala Arts Theater thanks both Posey and Fagan for bringing this remarkable show to our community and for their generous donations of their time and proceeds to help support our important local non-profits. Please join us and them for an evening or afternoon of pure theater enjoyment. 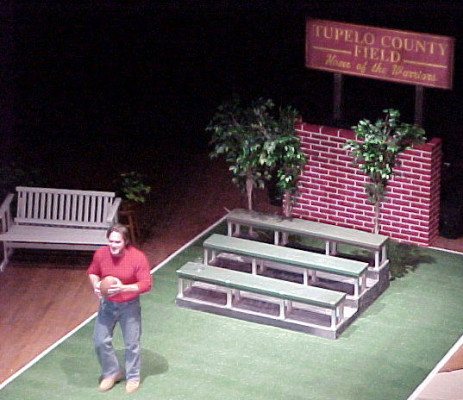 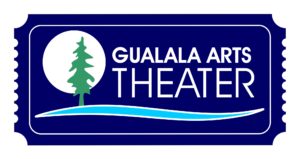