The October 2015 exhibit at The Dolphin Gallery features two artists returning for their third joint show. The opening night reception is on Saturday, October 3 from 5:00 p.m. to 7:00 p.m. and the show runs through Tuesday, November 10.

It has been a long interesting journey that led Star DeHaven from learning to sew at the age of 10 to being a well-known and much sought after stained glass artist. Her upcoming October Dolphin show will be with PT Nunn, their third Dolphin Show together.

After moving to the coast in 1986 and setting up her Sea Ranch studio DeHaven became a fixture in the local art scene. She was the first Sea Rancher to participate in the North Coast Artists’ Guild’s Studio Discovery Tour and continued to participate for 17 tours. She is a long time member of Gualala Arts and participated in many Art in The Redwoods shows.

In addition, she has received many local commissions including the glass panels for the dining room doors at St. Orres and windows for the Green Cottages in Elk. She has had numerous private installations in Gualala, The Sea Ranch, the San Francisco Bay Area, San Diego, Florida, Washington DC, New Orleans and a few in Europe.

As a young woman in the sixties DeHaven worked as a seamstress on everything from laced leather halter tops to fancy silk shirts and ceremonial karate uniforms. In her early thirties she took a class in stained glass that kindled her lifelong passion for this art form. More classes and better tools refined her skills. She also attended workshops with renowned glass artist Narcissus Quagliata. Working with glass has become her life’s vocation.

Each of DeHaven’s creations is a labor intensive process that begins with trips to glass factories and warehouses to search among the mouth blown glass and hand rolled sheets to handpick each piece searching for the perfect color, texture, and play of light. She hand draws all of her designs which may range from traditional forms to more fanciful abstractions incorporating crystals, flame-worked beads, or fused glass.

More recent works are very intricate mosaics made with millefiori slices and glass tiles. Millefiori is made in Murano, Italy by taking hot molten glass and stretching it into canes and when cooled, cutting it into slices. Millefiori literally translates to “one thousand flowers.” This new passion will be seen at the October Dolphin show. 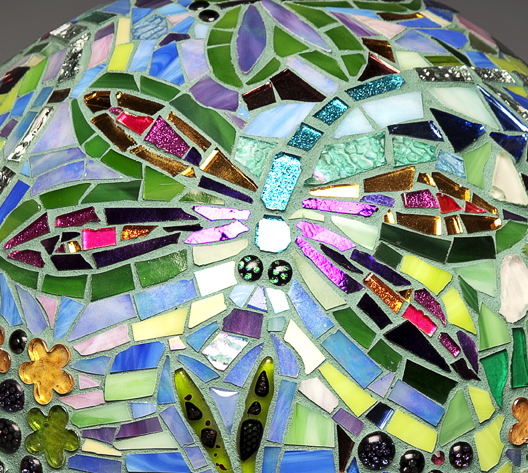 PT studies painting, drawing, and design extensively, each of which calls on different artistic skills. This exhibit features her watercolors and acrylics on canvas as well as small, matted sketches and matted watercolor sketches. She and Star DeHaven have exhibited together at the Dolphin Gallery twice in the past, in 2012 and 2009. 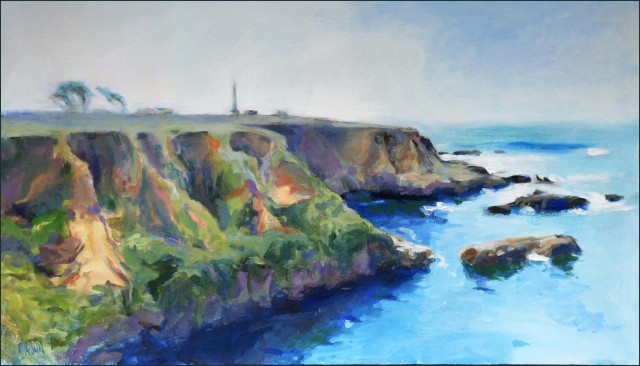 Nunn brings an atypical perspective to her art that has been formed by her technical experiences working for Bell Labs, Iterated Systems (fractal compression), and Netscape/Mozilla. The idea of opposites attracts her.

She sees both the mathematical order throughout nature and the dramatic, poetic stories beyond the patterns. Even the most familiar object may hold an unrecognized facet that can inspire a new painting with a hidden story. Whatever medium she selects each painting possesses strong colors and a certain kinetic quality.

Drawing is the basis for all her work, and, for her, is more like thinking than “making pictures”. Drawings are like maps of the experience of active seeing and studying the visual world.

Nunn approaches design work like a puzzle. The puzzle is solved by conveying the client’s information via an evocative and memorable visual image. Her favorite design projects involve illustration.

To see a selection of her paintings, drawings and design work, visit PTNunn.com.