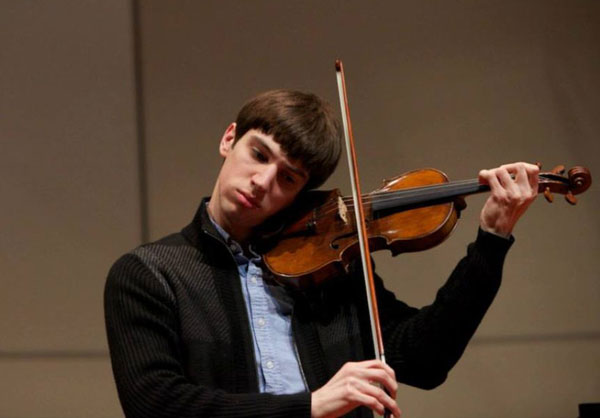 A native of Milwaukee, Wisconsin, violinist Wyatt Underhill is active in many spheres of the music world today, from baroque to contemporary, as soloist, orchestral player and chamber musician. He has appeared as soloist in varied repertoire, from Alban Berg’s Violin Concerto, to J.S. Bach’s Brandenburg Concerto No. 5 on period instruments; as concertmaster in works from Rimsky-Korsakov’s Scheherazade to an orchestral rendering of Dr. Seuss’ The Sneetches with narration; and in chamber music settings from Beethoven String Quartets to free improvisation. Underhill is a graduate of the Oberlin Conservatory where he studied with Gregory Fulkerson, and is currently pursuing his Master of Music degree with Catherine Cho at The Juilliard School.

As a soloist, Underhill has taken top prizes in several competitions and has appeared with the Milwaukee Symphony Orchestra, the Oberlin Orchestra and the Concord Chamber Orchestra. He was the winner of the 2nd Prize and the Prize for the Best Performance of the Commissioned Work at the 28th Annual Klein Competition for Strings in San Francisco, and was a winner of Oberlin’s 2012-2013 Senior Concerto Competition, performing Alban Berg’s Violin Concerto with the Oberlin Orchestra. Underhill has appeared in recital at the Kennedy Center, performing Arnold Schoenberg’s Phantasy for Violin and Piano, Opus 47 as part of the Conservatory Project. He has performed in masterclasses for James Ehnes, Stefan Jackiw and Christian Tetzlaff.

Underhill’s concertmaster credits include the Juilliard, Oberlin and Colorado College Summer Music Festival Orchestras. As concertmaster of the Oberlin Orchestra he has performed at Carnegie Hall and on tour to China and Singapore. While at Oberlin he also served as concertmaster for several off-beat projects, such as the world premieres of ’80s rocker-turned-composer Kip Winger’s ballet Conversations with Nijinsky, and Lorenzo Palomo’s The Sneetches, based on the Dr. Seuss book of the same name, narrated by John de Lancie. Underhill has performed under the batons of conductors such as James Levine, Nicholas McGegan, Emmanuel Villaume and Scott Yoo. 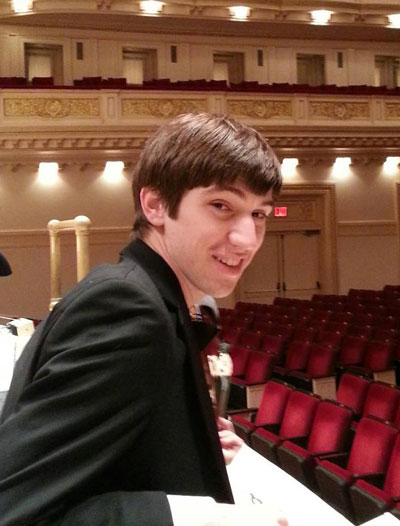 An avid contemporary musician, Underhill has performed with several notable new music ensembles. He has toured with Oberlin’s Contemporary Music Ensemble (CME), and as concertmaster of that ensemble he gave the world premiere and first recording of Philip Cashian’s Cello Concerto, written for Oberlin professor Darrett Adkins and CME. In recital at Oberlin, Underhill gave the first pairing of one of Elliott Carter’s final works, Mnemosyne for Solo Violin, with Carter’s 4 Lauds for Solo violin, a grouping he hopes to popularize in future “all-American” violin recitals. Underhill has given performances of the music of his colleagues, including Spiraling Sparks for violin and piano, by fellow Juilliard student Sayo Kosugi, and the premiere of fellow Oberlin student Jacob Market’s Violin Concerto. At Juilliard he has performed with AXIOM and the New Juilliard Ensemble, and has given contemporary music performances under various auspices, from Wuorinen’s New York Notes at Juilliard’s ChamberFest, to Schnittke’s String Quartet No. 4 on the 2014 FOCUS! Festival at Juilliard.

Also a baroque violinist, Underhill holds a minor in Historical Performance from Oberlin, where he studied with Marilyn McDonald. He has performed as assistant principal 2nd with Cleveland’s baroque orchestra, Apollo’s Fire; with Juilliard 415 in several concerts, including Juilliard’s production of Handel’s Radamisto; and at the Boston Early Music Festival as part of Oberlin Baroque. He has appeared as soloist with the Oberlin Baroque Orchestra, performing Bach’s Brandenburg Concerto No. 5 in D major.

Wyatt’s Juilliard colleague, Han Chen, will perform with him at this concert on the piano. 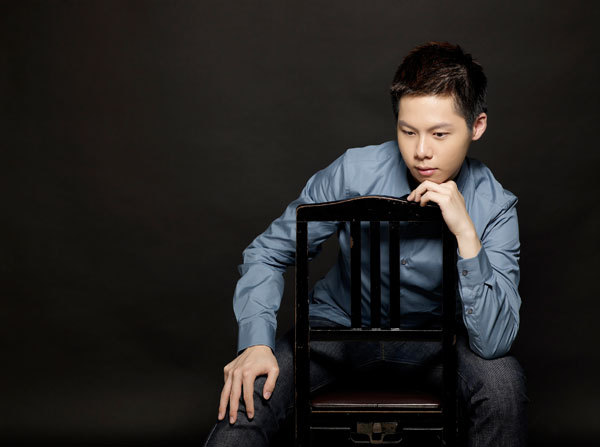 Hailed by the New York Times as a pianist with “a graceful touch… rhythmic precision… hypnotic charm” (2012) and “sure, subtle touch,” (2014) Han Chen is a distinctive artist whose credentials at a young age already include important prizes in competitions of traditional music as well as increasing respect in the avant-garde.

As an enthusiastic advocate for modern music, Chen actively performs both 20th-century classics and works by emerging composers. His close collaboration with the Juilliard modern music ensemble AXIOM led him to the performance of music by composers such as Pierre Boulez, Toshio Hosokawa, György Kurtág, Magnus Lindberg, Steve Reich, Charles Wuorinen. He was appointed as one of the soloists in John Adam’s Pianola Music in the 2012-2013 season, and will be performing John Cage’s Concerto for Prepared Piano in the 2014-2015 season.

A native of Taichung, Taiwan, Chen attended the Taichung Municipal Guang Fu Elementary School and later on the Shanghai Conservatory Elementary & Middle School. His teachers included Meng-hua Wu, Tsuifong Hung, Siyi Wu, Christoph Zhong and Kuan-wen Wang. He has also worked with Jonathan Biss, Richard Goode, Misha Dichter, Robert Levin and Choong-mo Kang. He is now pursuing his accelerated Bachelor’s and Master’s Degree of Music at The Juilliard School under professor Yoheved Kaplinsky, whom he also studies with at the Aspen Music Festival and School under the New Horizon Fellowship.

Tickets are $25 advance; $5 more day of concert (buy your tickets early!).
Children and young people ages 7 through 17 are admitted free with adult.