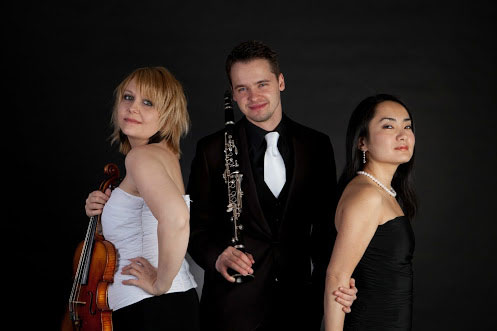 The Zodiac Trio enjoys an international concert schedule that spans three continents and presents an eclectic repertoire that mixes contemporary with the traditional.

In its relatively short history – the ensemble formed in 2006 at Manhattan School of Music, before becoming the first American group and the only ensemble with a wind instrument to enter the esteemed Ysaÿe Quartet Chamber Music program at the Paris Superior Conservatory – the Zodiac Trio has managed to achieve a level of recognition on the international chamber music stage, rarely bestowed upon an ensemble of such untraditional instrumentation.

The Zodiac Trio was originally formed under the guidance of renowned clarinetist David Krakauer and violinist Isidore Cohen of the Beaux Arts Trio. Shortly after its inception, the Trio was introduced to the New York audience by WQXR’s Bob Sherman, who aired multiple performances by the young ensemble on the “Young Artist Showcase.” Subsequently, the Zodiac Trio gave its official debut at the Kaufman Center, prompting Edith Eisler of the New York Concert Review to describe the young ensemble as “excellent…,” praising its “remarkable ability” and “infectious enjoyment of the music.” The debut was followed by a string of concerts in Southern France where the Trio was further praised by the Nice-Matin which raved “…unforgettable concerts by the Zodiac Trio! …Truly exceptional and sublime talent… The prestigious level of the performances radiated the undeniable talent of the trio and foreshadowed their great success in the future.”

In 2007, the Zodiac Trio was first brought to the attention of the international chamber music scene in a feature by the London-based international MUSO magazine, praising the Trio for “bringing a rare combination of instruments into the spotlight by unearthing old repertoire and commissioning new music.” At this time, the young ensemble was making its mark on the competition circuit, having garnered prizes at the Yellow Springs Chamber Music Competition (Ohio, U.S.), FNAPEC International Chamber Ensemble Competition (Paris, France), International Chamber Music Competition of Duchi D’Acquaviva (Italy), Val Tidone International Music Competition (Italy), the Cziffra Foundation (France), Joyce Dutka Foundation for the Arts (New York), International Peninsula Young Artist Festival in California and the ProMusica Ensemble Competition (France), among others. The ensemble also received a Recording Grant and a Commission Grant from Co-op Press, resulting in its first commercial CD. The Zodiac Trio is a laureate of the 6th International Osaka Chamber Music Competition in Japan, and was awarded the Encore Grant from the American Composers Forum in 2010 to support their collaboration with composer Andrew List. In 2013, its latest recording featuring staple trios by Bartok and Stravinsky, in addition to Galina Ustvolskaya and Nicolas Bacri (world premiere recording) received the coveted Ring Award by the French Magazine “Classique Info.” 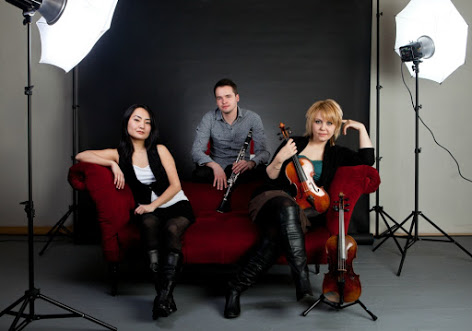 Dedicated to education both on a conservatory level and in public schools, the Zodiac Trio is often called upon to present master classes, clinics and music presentations for young audiences at such institutions as Mount Alison University, Acadia University, Western Michigan University, Colorado College, Boston University, Berklee College of Music, Boston Conservatory, Tufts University, Tulsa University, Western State College of Colorado, Southeastern State University of Oklahoma, Lonestar College Montgomery in TX, and the China Conservatory of Beijing, among others. In addition, the Zodiac Trio has developed an innovative program for children titled “Sound of the Imagination” which debuted at the Beijing Children’s Theatre and has subsequently been broadcast by CCTV News in Beijing to millions of viewers.

A strong advocate of new music, the Zodiac Trio has commissioned new works in order to expand the clarinet-violin-piano trio repertoire, and strives to serve as a platform of exposure for up-and-coming composers. Commissioned composers include Richard Danielpour, Ofer Ben-Amots, David Colson, Andrew List, Larry Bell, Andy Vores, Xavier Bouchaud, Marcus Paus and Sy Brandon. The Zodiac Trio was the founder of the Boston New Music Project, that saw the ensemble in an annual week-long residency in Boston from 2010-2014, that comprised Berklee College of Music, Boston Conservatory, Boston University and Tufts University. The BNMP served as an outlet for contemporary music featuring American composers by presenting performances and student-composer readings/clinics, to encourage exposure and growth of new music in the United States.

In the summer of 2013 the Zodiac Trio presented the inaugural season of the Zodiac Music Academy & Festival in Southern France, which attracted 33 students and young professionals. The students spent two weeks of intense musical study with an international faculty of ten professors, renowned guest master classes, performed for European audiences and were coached by the Zodiac Trio in a chamber music setting. Following the success of its opening year, the Zodiac Music Academy & Festival presented its second season in 2014 which saw a record-number of applicants, and the launch of a composition department that featured five young composers from institutions such as Indiana University, Manhattan School of Music and Juilliard School of Music. The program presented 5 commissioned works, premiered at the Festival, and 10 concerts in total.

In the Spring of 2015 the Zodiac Trio will release a new recording on the Blue Griffin label featuring works written for the ensemble by American composers Richard Danielpour, John Mackey and Andrew List. 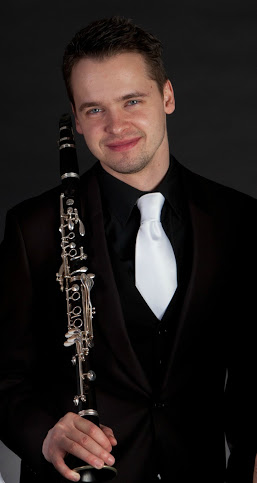 Kliment Krylovskiy, clarinet
Praised for his “easy facility, a vibrant tone” and “expressiveness and exuberance” by the New York Concert Review, “masterful playing” by L’Orfeo (Mexico), “confident musicality” by the Lincoln Journal Star and proclaimed as “an artist whose profound musicality is only matched by his sparkling technique” (Nice-Matin, France), American-Russian clarinetist Kliment Krylovskiy has been enjoying an international concert career as member of the esteemed Zodiac Trio.

In 2007, he was awarded the prestigious Harriet Hale Woolley Scholarship which carried a one-year residency in Paris, where Mr. Krylovskiy performed extensively – serving as an American musical ambassador to the French audiences. He has also studied at Indiana University Bloomington with Eli Eban, the Manhattan School of Music with David Krakauer, Paris Superior Conservator and the Nice Conservatory (France) with Michel Lethiec.

Mr. Krylovskiy is the Founder and Artistic Director of the Zodiac Music Academy & Festival in the South of France, that invites highly advanced student and pre-professionals to spend two weeks performing on the Côte D’Azur and study with an internationally-acclaimed faculty (more information: www.zodiacfestival.com).

Vanessa Mollard, violin
French violinist Vanessa Mollard has appeared as soloist with the Gent Symphony Orchestra, Geneva Philharmonic, Marseille Symphony Orchestra and the Monte-Carlo Symphony, and has worked with Pierre Boulez, Mstislav Rostropovich, Kurt Mazur and Jean-Claude Casadesus. As a pioneer of new music, Ms. Mollard has collaborated with renowned composers Nicolas Bacri and Laurent Petigirard, whose compositions she premiered. A recipient of the Princess Grace of Monaco Foundation sponsorship, she has studied with Olivier Charlier, Patrice Fontanarosa, Gerard Jarry, Roland Daugareil and Ivry Gitlis.

Ms. Mollard has been enjoying an international concert career as member of the esteemed Zodiac Trio. In addition, she has toured throughout China multiple times, and has given chamber music and instrumental masterclasses at such institutions as Boston University, Berklee College of Music, Boston Conservatory, Tufts University, Western State College of Colorado, Southeastern State University of Oklahoma, Western Michigan University, Colorado College, Ningboa University (China) and the China Conservatory of Beijing. She holds a Diploma from the Royal Superior Conservatory of Gent (Belgium), a First Prize from the Marseille Conservatory (France), which she obtained at the age of sixteen under the tutelage of Pierre Hommage, a Bachelor Degree from the Manhattan School of Music where she was a pupil of Patinka Kopec and a Performer Diploma from Indiana University Bloomington where she studied with the legendary Franco Gulli and Emile Naumoff, last student of Nadia Boulanger.

Riko Higuma, piano
A versatile musician, Riko Higuma is a highly sought-after piano collaborator and a sensitive chamber musician, performing with the world’s leading artists throughout the United States, Europe, Russia and Japan. As a soloist, she was a top-prize winner at the Jacob Flier International Piano Competition and the Santa Fe International Piano Competition.

Ms. Higuma has participated in numerous music festivals around the world, including the Nagano-Aspen Music Festival and the LaJolla Music Society Summerfest in California, where her live solo performance was broadcast on NPR’s Performance Today. Notably, she was one of the Young Artists for the Van Cliburn Piano Institute in Fort Worth, where she appeared with the Fort Worth Symphony under Edward Browne. Ms.Higuma’s collaborations on the recital and concert stage have included distinguished artists such as Albert Markov, Paul Cohen, Neil Rosenshein, Jeffrey Solow and Aaron Rosand. She has also collaborated in a chamber music setting with Cho-Liang Lin, Alan Gilbert, Charles Curtis, Steven Tanenbom, Jorge Bosso, Dora Schwarzberg, Timothy Eddy, and Yovan Markovitch, Suren Bagratuni among others.

For the past five years she has been a regular participant of the International Academy of Music in Italy and the Summit Music Festival in New York, where she performed a gala recital with the legendary violinist Aaron Rosand. She is currently engaged as a staff pianist and vocal coach at the Manhattan School of Music. 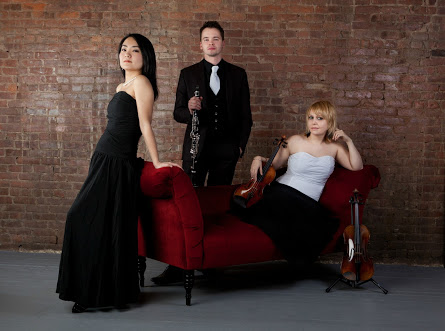