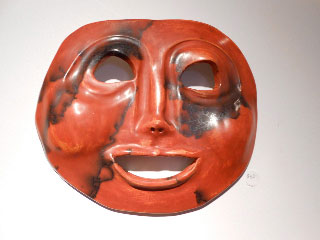 This month the Dolphin Gallery features Bea Acosta in her first one-person show entitled “Fuego y Humo” (Fire & Smoke). She has had three previous successful appearances at the gallery in two-person shows dating back to November of 2004. Each time she has built upon her previous work and provided new surprises and this show is no exception.

Most recently Acosta has been employing a new primer called “terra sigillata” that she formulates herself. This process, found first on ancient Roman pottery and later in Renaissance Italy, produces a glossy surface ranging from a soft luster to a brilliant glaze-like shine, in a characteristic color range from pale orange to bright red. 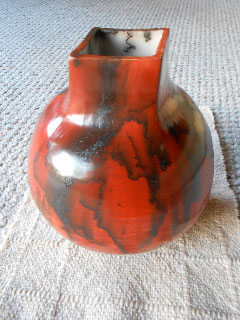 Finishing the piece requires application of between four and twenty layers of this very thin slip, each layer of which is hand buffed. By altering the primer formula, producing either a white terra sig or a red terra sig, Acosta can produce a variety of effects.

After the greenware firing, Acosta proceeds to Sagger fire the pieces using seaweeds, various salts, copper and even Miracle-Gro. Acosta also may embed horsehair in the piece, after the initial firing which can create a marbling effect.

Besides her terra sigillata pieces, Acosta plans to include others that are burnished leather-hard, fired , then smolder fired in a pit filled with sawdust. This method results in distinctive smoke cloud designs fixed on the finish.

The exhibit also includes examples of her basket weaving using pine needles, waxed threads, beads and other found materials. Some baskets are intended to be functional while others serve as art pieces. 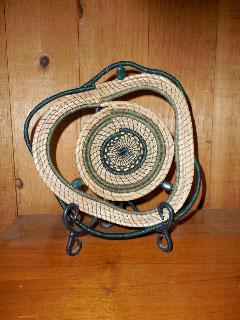 Spontaneity is inherent in all her creations because of the way she works, the material she uses and the process she employs. For Acosta, experimenting with various techniques is an organic experience. Each piece evolves as she hand builds it, using the slab and coil method, working the clay through multiple firings and treatments.

Combining the elements of fire and earth (the clay itself) appeals to Acosta’s Native American and Mexican heritage. The influence is obvious in the finished products. Both her masks and her vases suggest the primal and spiritual qualities of indigenous people. Examples Acosta found in the Southwest were the inspiration for her exploration of the terra sigillata method.

Her work has won numerous prizes including a First Place and Judge’s Award in the 2005 Art in the Redwoods. Besides her successful Dolphin shows, she has had showings from Sea Ranch Lodge to Point Arena where she is a member of the Coast Highway Artists Collective. She helped curate last year’s Artists Collective show that featured local Native American artists. Her artistic journey began in 2000 at Kaye Like’s Brandybuck Ranch Pottery Studio and she also has taken classes at the Mendocino Art Center.