This exhibit has been cancelled 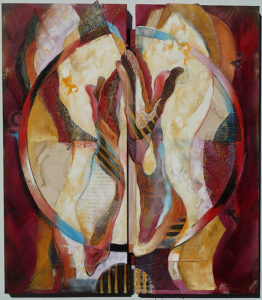 The arts and cultural influences of Asia play a large role in our lives here in the Bay Area. I have been traveling to Asia since 1976, and over the last eight years have also spent time volunteering in India and Cambodia, teaching art to under-privileged children. My mixed-media collages, paintings, and collage/sculptures draw on the visual inspiration and the spirituality I have encountered on my many journeys, especially in my use of the exquisite art papers I bring back with me. Learning from other cultures is a wonderful way of expanding our own visual language. 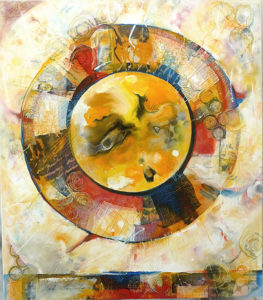 I feel that all of the world’s art history is like a great caravan that started many thousands of years ago, and every artist gets the chance, if not to be on that caravan, to at least put something in one of the saddlebags. And to learn from all that has come before, across the many centuries, the oceans and the deserts, and the wonder we call “ civilization”.

Born in New York City, Gerald Huth studied art and architecture at the University of Pennsylvania, with further studies at the Ecole des Beaux-Arts in Avignon, France, and the Art Students’ League in New York.  He has had more than 50 exhibitions, including numerous ones in France, Germany, Switzerland, Austria, and Australia. His work is in many public and private collections throughout the USA and abroad. 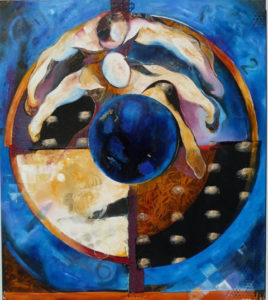 Gerald Huth’s art deals with “the human condition”, with events in his life and the world around him. Much of his work is also influenced by the arts of other cultures and civilizations, encountered during his extensive travels around the world. His work often has the human figure as its focus, but there are also many pieces where the line between figurative and abstract becomes blurred.

Gerald Huth works in a variety of media, often mixing different ones in an attempt to achieve the strongest response from the viewer. There are mixed-media collages, collage/sculptures on rotating bases, and large paintings combining oil on canvas, papers, and wood or other materials. He believes that “the role of the artist is to fulfill the human expression of the time in which we live.”