Free (but donations are always welcomed and encouraged!)

has now been healed through art’s power to visually share a story of hope. 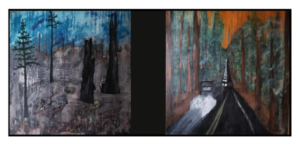 A life once led by emotional turmoil wrought by the Camp Fire . . .

Brian Holderman’s experience of being trapped for eight-hours in the blaze that devastated Paradise California comes to life through 10 paintings, 20 photographs, and five video clips.  On that day, he was at work in Chico, but decided to return to Paradise to rescue his two dogs one that was a service dog at the school where he was the principal.   “I knew the students would be devastated if anything happened to Bear the service dog. What I didn’t realize is the emotional affect the experience would have on me.”

After finishing out the school year, Brian was placed on one-year medical leave.  Purely by happenstance, he traveled to Gualala one weekend in April 2019.  “This was the first time I felt I could truly breathe without the memories of the Camp Fire.  This was such a healing place.  During that weekend, I made the decision to move to the area.  I lost everything in the Camp Fire and what better place to start over.”

After his move, he found a creative outlet for the trauma through painting. 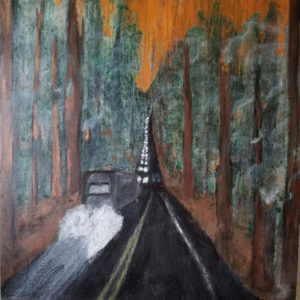 The paintings allowed him to release the pain he was holding.  The final painting in the series is titled, Hope.  This painting depicts vegetation peeking its way through the devastation.  “It is a show about what happened to me on that day but ending with hope that things will rejuvenate and come back.  That is what I want people to walk away with.  Even though it was a very devastating time and there was a lot of destruction that happened, we can take that pain and do something creative and positive instead of turning our efforts into something that won’t help us grow from the experience.  We can’t change what happened, but we can make a decision about how we’ll react to it.”http://gualalaarts.org/2020/04/inferno-one-mans-journey-of-the-camp-fire-through-art/

. . . has now been healed through art’s power to visually share a story of hope.

We also have video clips provided by Brian Holderman. The clips give the viewer some real insight into the tragedy.  Brian was driving from his home through Paradise, CA.

The video clips can be viewed here (running time).