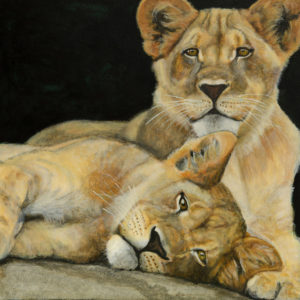 The animals in Stephanie Endsley’s paintings hold us spellbound by their shapes, colors and suggestion of movement, much as they did when we first saw them in a zoo as children.  The painter’s depiction of these wondrous creatures exude mystery and adventure transporting the viewer’s imagination to another realm.  Sadly, these animals are on the brink of disappearing from the Earth as their continued existence balances on a knife’s edge.

Stephanie’s portraits are the result of thousands of hours spent in the presence of her chosen subjects in order to gain an intimate understanding of each, much like a portrait painter of humans. Her painting process is fueled by memories of every interaction she has had with the animals, capturing and revealing precious moments.  Stephanie 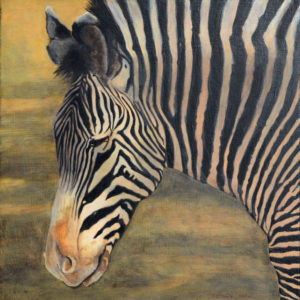 hopes viewers will share her experience and stop and connect with each portrait, each beautiful animal.

When did these animals – from zebras to giraffes to lions and tigers – become endangered, and why has the world allowed it to happen, she asks of us through her portraits?  Since Stephanie’s childhood,  human population growth and loss of habitat have dramatically affected all animal kingdoms. What happens if our most beloved creatures disappear from earth? How do we explain to our grandchildren that tigers were a fearless, striped, 700-pound cat and in human terms, an Olympic swimmer? That there once were graceful giraffes with legs and necks so long they could look into second-floor windows? That a condor with a ten-foot wingspan soared our North American skies? That narwhals with unicorn horns were abundant in our oceans?

Stephanie created this show to remind us of our connection to the animals who live in and share our planet, animals that won’t be here much longer unless we care enough to do something about it. “See me, I am worth saving,” her portraits seem to say.

We must never forget that the land and the waters are entrusted to us for the moment only, that following generations must live from that land and drink from that water. It is not enough to just leave something for them.  As stewards, we must leave it all better than we found it. – – Louis L’Amour

Stephanie Endsley lives in the remote Cazadero hills of Northern California. Born in Atlanta, she grew up in Chicago, attended the School of the Art Institute of Chicago and later received her BFA from Minneapolis College of Art and Design. Throughout her life, Stephanie has worked to refine her ability to create on canvas what she sees and feels.

Having had the good fortune to meet with conservation advocate Jane Goodall, Stephanie was deeply moved and re-confirmed her commitment to follow her heart through her art. Interactions with other wildlife conservation leaders and a trip to Africa gave her hope as well as an understanding that there is a lot of work to be done to save the Earth’s animals.  Through her portraits of threatened and endangered species, Stephanie has brought an awareness of the beautiful lives we are destroying and she is asking us to care enough to save them.