Fine Art Cake Contest: "A Night at the Movies!"

This year’s theme is “A Night at the Movies!”

Jane Head won First Place in the “Let Them Eat Cake!” fine arts cake decorating contest this year with her Ginger Rogers and Fred Astaire dancing on a cake theme.Second Place went to Corrina Peña for her “Starlight Theater” creation. Third Place was Janet Pierucci for her “Popcorn” cake. The Judges’ Choice Award went to Becky Thompson who showed up dressed as Cruella Deville as part of her “Free the Dalmations!” themed cake. Finally, 10-year-old Rita Peña proved to be as talented as her mom with her pink “The Best Theater” cake. 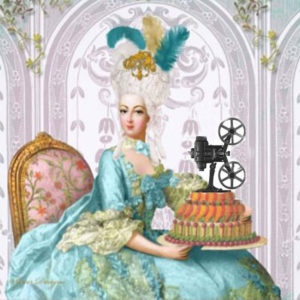 For this exhibit, artists are encouraged to use any ingredients for their cakes, remembering that they will be judged on artistic merit and not taste – although taste could be a tie breaker. All entries must be 40% edible. There is no size requirement or limitation with respect to the size of the cake. All artists must be present to cut their cake(s).

The cakes will be judged at 4 p.m. on the day of the opening reception for the show, and will be on view from 5 to 6 p.m. At 6 p.m. the artists will cut their cakes and attendees at the Gualala Salon and Salon des Refuses’ and Let Them Eat Cake! will get to eat the cake and wash it down with free champagne.

This year’s judge is Shani Christenson of Shani’s Sweet Creations in Mendocino.

This year’s judge is Shani Christenson of Shani’s Sweet Creations in Mendocino. Shani will have a cake on display at Gualala Arts Center to inspire cake artists and is willing to take questions from bakers if they need some expertise. Artists can call her at 707-397-1949.

“Let them eat cake!”: It’s one of the most famous quotes in history. At some point around 1789, when being told that her French subjects had no bread, Marie-Antoinette (bride of France’s King Louis XVI) supposedly sniffed, “Qu’ils mangent de la brioche” – “Let them eat cake.” With that callous remark, the queen became a hated symbol of the decadent monarchy and fueled the revolution that would cause her to (literally) lose her head several years later. But did Marie-Antoinette really say those infuriating words? Probably not. But we don’t really care, because for this year’s Gualala Salon, there will be no hors d’ oeuvres! We will all eat cake and drink champagne!

“How can this be?” you ask. And here’s the answer: Brought back by popular demand for the third year, in addition to the Fine Art Competition of the Gualala Salon, there will be a separate Fine Art Cake Contest. Artists will be encouraged to create Fine Art Cakes that will be judged on their artistic merit, not on their taste. Attendees at the opening reception for the Gualala Salon and Let Them Eat Cake! will get to eat the cakes and wash their cake down with free champagne.