Art in the Redwoods Festival 2017

Fine Art Exhibit is Free! Admission to the festival is $6; youth 17 and under are free.

Art in the Redwoods Festival 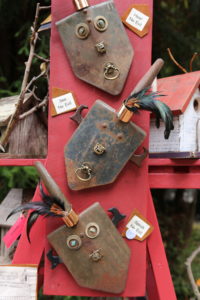 The 56th Annual Art in the Redwoods Festival,  the most popular and largest north coast art show in California, will take place Thursday, August 10, through Sunday, August 13.

More than 300 pieces of art have been entered into the Fine Arts Exhibit that opens on Thursday, August 10, at 6 pm with the Hat’s Off Dinner (see below). Hat’s Off Dinner guests receive the first opportunity to view and purchase art before it has been judged. Friday, August 11, 4 to 7 pm, the Champagne Preview opens to the general public. Judging of the art takes place at 6 pm (see below for information about this year’s judges).  The art will be judged in 15 categories with $5,000 worth of prize money awarded.  The Fine Art exhibit runs through Labor Day weekend.

Schedule of Events and Entertainment 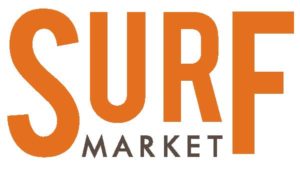 Surf Market is proud to support Gualala Arts.  Owner Steve May says, “It is our mission to be a benefit to our community, and supporting the arts is an
important part of doing that.”

With more than 300 art items entered in the Fine Arts Exhibit that is the heart of the Art in the Redwoods Festival, this event is one of the largest of its kind in Northern California. Artists from throughout California enter in 15 categories and $5,000 is awarded in cash prizes. Categories include Best of Show, Best Local Work, Most Popular, Clay & Mosaic, Collage & Mixed Media, Digital Art, Fiber, Textiles & Soft Sculpture, Glass Art, Oil & Acrylics, Jewelry & Ornamentation, Pastels & Drawing, Monochromatic Photography, Color Photography, Prints & Graphics, Quilts, Sculpture, Water Media, Woodworking, Jacquetta Nisbet Weaving Prize, Beading Excellence, Figure Drawing Excellence, Mendonoma Sightings Emerging Artists (Under 18), and Environmental Awards.  There are first through third place awards in each category. Awards are sponsored by local businesses and individuals. 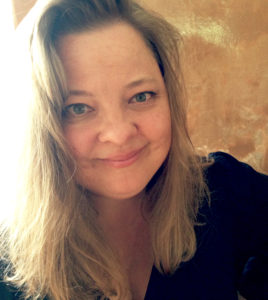 Connie Nartonis Thompson is a movie producer from Los Angeles.  Connie began her 25-year career working in the entertainment industry on Beavis & Butthead (1992) and The Ren & Stimpy Show (1993). In 1997 she started at the Walt Disney Studios where she worked on animated feature films including Fantastia 2000 (1999), Atlantis: The Lost Empire (2001), Chicken Little (2005), The Princess and the Frog (2009), and Tangled (2010) as well as the award-winning shorts The Little Matchgirl (2006), Lorenzo (2004), and Destino (2003). In 2007, she joined veteran producer Don Hahn at Disney’s live-action studio to associate produce the Disneynature documentaries Earth (2009), Oceans (2010), African Cats (2011), and Chimpanzee (2012). Hahn and Thompson also produced three documentaries – Waking Sleeping Beauty (2010), Hand Held (2010), and High Ground (2012). Connie then went on to associate produce the Oscar and Golden Globe nominated Frankenweenie (2012) directed by Tim Burton.  Connie left Disney for Illumination Entertainment to work on Despicable Me 2 (2013) and Minions (2015), two of the top-grossing animated films of all time.  Connie has a BFA in Studio Art and Art History from Principia College and has had a life-long love of art and design.  In her free time, she paints landscapes in Los Angeles and New Mexico.  She lives in Hollywood with her husband of 28 years. 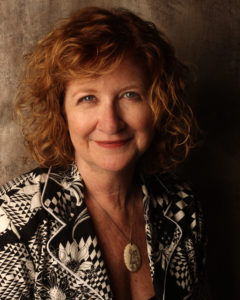 In November of 2011, Margot H. Knight became Executive Director of the Djerassi Resident Artists Program, her seventh job in the arts and humanities in 39 years. Each position has incorporated the things she loves–history, challenges, artists, scholars, education, and access. She has the privilege to guide one of the foremost artist communities on the planet AND is encouraged to pursue her own literary pursuits. Her play, Funnel of Love was published in Characters Magazine.

Previous positions include the presidencies of United Arts of Central Florida and United Arts of Raleigh & Wake County, executive director of the Idaho Commission of the Arts and Washington State University’s Oral History Office and staff positions with the National Assembly of State Arts Agencies and Washington Commission for the Humanities. She served two terms on the Private Sector Council for Americans for the Arts and is a proud recipient of the Michael Newton Award. A frequent consultant, speaker, and grants panelist, she has also served on over 25 chamber of commerce, tourism, regional planning and cultural boards, including the Florida Division of Cultural Affairs, Visit Orlando, and Florida Cultural Alliance. Margot lives on-site at the Djerassi Program with her husband, Nick, and two cats. She can be reached at margot@djerassi.org or via Facebook (MargotHalidayKnight) or Twitter @artsmargot.

This special evening of fine food, wine and art was originally held on Friday night for many years but since its 2007 moved to Thursday and has become the opening event of the annual Festival. After being closed since August 1st to prepare the building, take in and hang the art, the Arts Center will open its doors to the public for the first time to the Hats Off Dinner guests, who will be the first people to view the fine art exhibit and purchase the art before it is judged on Friday.

Hats Off Dinner celebrants will get a sneak peek preview of the Fine Art Exhibit and have the opportunity to purchase art before it is judged, and receive VIP Festival Passes that will admit them to the Friday Champagne Preview and the Festival itself.

Tickets to the Hats Off Dinner are by reservation only, and are $150 per person which includes a $100 donation and VIP Festival entry to the Champagne Preview on Friday, August 10 from 4 pm to 7 pm and the weekend festival activities on Saturday or Sunday.

Reservations can be made by visiting the Gualala Arts Center or calling 707.884.1138. 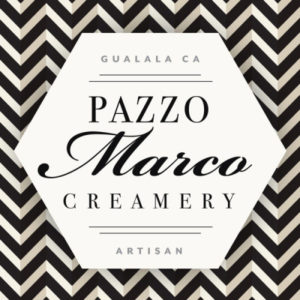 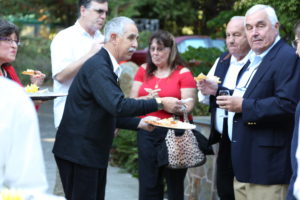 The Champagne Preview is on Friday evening August 11, from 4 pm to 7 pm (admission $10). Champagne will be served until 6 pm when the judges’ award presentation and critique begins.

Outdoor artist booths will be open for a sneak preview from 4 – 6 p.m. The Fine Art exhibit sneak preview is from 4:30 – 7 pm. Award presentations and judge’s critique will take place Friday at 6 pm in the outdoor amphitheater. Artists should be present to receive awards but are not required.

More than 25 artists will showcase their wares at the Art in the Redwoods Festival starting on Friday, Aug. 11 for the Champagne Preview at 4 pm and again from 10 am Saturday and Sunday, Aug. 12 and 13.

“Jewelry always tops the list with the largest number of artists,” says Walt Rush, whose Rogue Wave Studio creations will be on display. Rush says he is influenced by the coastal surroundings and the metals and stones with which he works.

Pt. Arena artist Ling-Yen Jones finely handcrafted pieces will once again be on display. Jones works mainly in silver, semi-precious stones and pearls. The Ling-Yen Designs style ranges from the traditional to the modern.

Another coast resident and regular artist to Art in the Redwoods is Rhoda Teplow, who makes jewelry from beads she has collected from her travels to China and Africa, each with its own story and history.

Ellen Athens of Mendocino enjoys experimenting with her jewelry and likes to work with glass bead mosaic, cloisonné enamel and kumihimo braiding, process that she says foster the marriage of color with structure.

Oakland artist Carol Bernau, of “Adornable”, uses bead-weaving techniques from all over the world to create each piece that employs stitches such as Ndebele, square, African helix, brick, pyote, right-angle, and Russian spiral.

At least a half dozen ceramic and pottery fine arts vendors will offer shoppers their creations, including returning artist Alexis Moyer of The Pot Shop in Philo.

Joann Cassady will be sharing her whimsical Raku designs and pit fired pottery, a unique process that produces patterns and colors created by the random action of the fire and the influence of the surrounding materials.

Ceramicist Debra Haber, of Mendocino, creates porcelain functional ware, often with a twist. She says she works with intention, taking “my inspiration from the world around me. Nature, man-made objects, antiquities and my fellow potters.”

Fine Art painter Karen Legault, of Oakland, is a watercolor artist whose fusion style of Asian and Western techniques and concepts expresses life, movement and energy in rich and colorful nature-filled compositions of flowers, still lifes, ponds and landscapes. Her motto is “Serenity that energizes.”

“There are times when it seems that nothing is going on, but truly everything is going on. Making art is a constant, it feeds my spirit, dares me to open to the unknown, tunes me in and then all the “other” falls away,” says artist Emily Whittlesey from Comptche. Whittlesey paints in oils and has designed a line of screen printed baby clothing.

Berkeley artist Stuart Ratfliff’s striking graphic prints and designs conjure an other-worldly feel, losing viewers in their colorful serenity. Ratliff graduated from St. John’s College in New Mexico. With little formal training, he has a passion for utter immersion in life and this exuberance is transferred in his philosophical and mindful art.

As David “Sus” Susalla, Executive Director of Gualala Arts says, “There is something for everyone!”

Good food, great music, and fine art! AND the annual Pacific Piecemakers Quilt Guild quilt raffle AND, new this year, the Seedling Art Grove, where donated silent auction items are planted to grow the Arts Center! So much to do, so little time… it’s a FULL two days of activities and festivities! Come out and enjoy the FUN!

The Seedling Art Grove is a new addition to the Art in the Redwoods displays along Community Row. Here, you can peruse and bid on items that have been donated in order to grow Gualala Arts! The Silent Auction items will be called at 3 pm, Sunday, August 13, along with the Pacific Piecemakers Quilt Guild raffle. 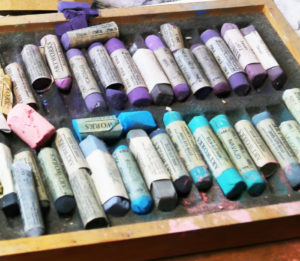 Bill Vellutini has generously donated his late wife Peggy Zink Vellutini’s pastels and art supplies as well as a 16-foot wooden kayak and 14-foot wooden stand up paddleboard he built himself. “It is the right thing to do,” Bill said, about the donations. “Peggy would have like this… her three sisters will appreciate seeing the plaque at Gualala Arts (in the Donor Grove).”  Peggy Zink Vellutini was well known for her pastel works.

The 1953 original Phil Paradise watercolor painting was generously donated by artist Bruce Jones. The piece is matted and framed and certificated by Starry Sheets, Irvine Calif., and is estimated to be worth more than $1,500.

The 1953 original Phil Paradise watercolor painting was generously donated by artist Bruce Jones. The piece is matted and framed and certificated by Starry Sheets, Irvine Calif., and is estimated to be worth more than $1,500.

Music never fails to provide soothing notes for the artistic soul.  Throughout the four days of events,             from the Hat’s Off Dinner on Thursday, August 10, to the last day of the festival, Sunday, August 13, there is a little bit of something for everyone.

In the Redwood Grove on Saturday from 11:30 am to 2 pm, Barbara Johannes will play accordion in teh Redwood Grove. She can also be heard at the Champagne Preview, Thursday, August 11.

On the JAMI Amphitheater stage, enjoy Renaissance Madrigals and classical music by the Fort Ross Chorus on Saturday, August 12 at 12:15 pm.

The Ernest Bloch Bell Ringers will play in Coleman Hall on Saturday at 1:15 pm and Sunday at noon.

Upstairs on the mezzanine on Sunday, John Micka returns with his classical acoustic guitar in the main Arts Center building.

The Festival is open to the public on Saturday, August 12, from 10 am to 5 pm and on Sunday, August 13, from 10 am to 4 pm for the indoor fine art exhibition and outdoor festival activities. Admission is $6.00 for adults, and youth 17 and under are free.

More details on this event are coming soon,