on the Gualala Arts Center grounds

The Gualala Arts Center grounds will be filled with “hot cars under the cool redwoods” when the 8th Annual Gualala Arts Auto Show takes place on Saturday, July 16, from 10 a.m. to 4 p.m. This show will feature more than one hundred custom/modified, hot rod, stock, sports and display-only cars, including the vintage dragsters which have become a signature of the event. Admission to the show itself is free; there is a $5 donation per car requested for onsite parking.

Gualala Arts will honor Auto Show Angel Jim Grenwelge and feature special designer and artisan Kent Fuller, a veteran pioneer in the world of drag racing and hot rods. He will present his original cult classic 1962 Volksrod roadster in the Elaine Jacob Foyer. 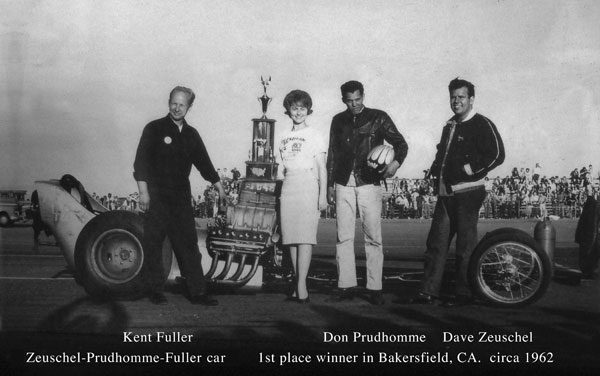 Early on, at the age of 12, Fuller demonstrated his automotive engineering talent by designing a first-place winning soapbox racer, the “Sunkist Special.” While building this wooden vehicle in his father’s citrus packing house, Fuller paid special attention to the front-end wheel alignment, making sure the car would travel in a straight line when coasting on its own, unassisted by a driver. According to Fuller, this was the advantage that won the race for his car. 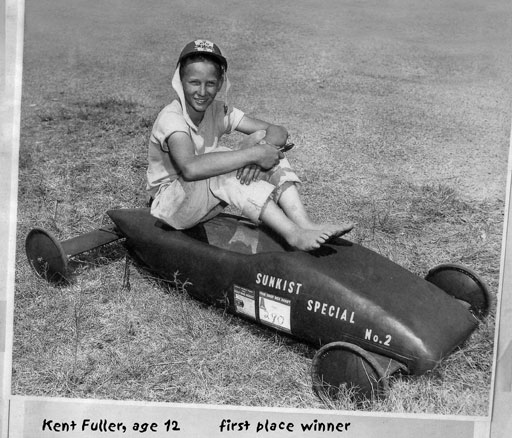 Since 1956, Fuller has built many dragsters, funny cars and other special cars for some important names in hot rod history. He is responsible for installing the first rollbar on a front-engine dragster, a critical safety feature which became the standard for all subsequent dragsters.

Fuller’s 1962 Volksrod consists of a Ford 1923 Model T truck body originally equipped with a Volkswagen rearend and powered by a Porsche Carrera engine – now replaced with a Porsche 356 engine. Right after its completion, his Volksrod was featured on the cover of Rod & Custom Magazine. Fuller built several more of these Volksrods, as did a small loyal following of imitators. He is dubbed “The True Father of The Volksrod” by Volksrods.com.

Also featured in the Automotive 2012 Art Exhibit is a collection of nostalgic and historic photographs showing highlights of Kent Fuller’s noteworthy career.

In 1992 he was inducted into the Oakland Roadster Show Hall of Fame and later into the International Drag Racing Hall of Fame.

The Auto Show on July 16th will feature a wide variety of food and drink, including breakfast items by Tanya Radtkey’s Black Oak Catering from 7 a.m. to 10 a.m. Lunch will be served from 11 a.m. to 3 p.m. and will feature wood-fired pizzas, hamburgers, salmon, chicken, and black bean burgers, hot dogs, side salads, whole fruit and chips. Lagunitas Brewing Company’s craft beers, wine, and soft drinks will also be available.

This year there are five judging categories – Stock, Custom/Modified, Hot Rod, Sports Car and Display Only – but as in previous years there are several special awards that will be presented. Many of the previous winners of the Judges’ award return, including “Longest Distance Traveled,” “Most Creative,” “Best Paint,” “Best Motor,” “Best Interior,” and “Best of Show.” Other special awards that will be presented by Auto Show sponsors include the Surf Market Super Pick, Gualala Supermarket trophy, Lions Club Award, Best Make-Out Car and LA Roadsters Award (given to the top pure roadster as determined by the judges). Finally, Auto Show attendees will vote on the People’s Choice Award and Ladies’ Choice Award during the show. The awards presentations will begin around 3 p.m. in the JAMI Amphitheater. Attendees will also be invited to vote for their favorite art works, by both adult and youth artists, in the Automobilia exhibit, with the winners’ art being awarded the Automobilia Auto Show People’s Choice Awards.

Several sanctioned supporting events will also take place. On Friday, July 15, from noon to 6 p.m. the Sundstrom Mall parking areas behind the Gualala Hotel and in front of the former Jack’s Gualala Pharmacy will host “Dirty Jack’s” Drive-In Car Show, presented by Jack Chladek. “All cool cars are welcome, whether they are in the Auto Show or not,” says Chladek. “My team and I will be serving up free hot dogs, chips and soft drinks and the Gualala Hotel will be offering special event cocktails.” Auto Show registrants will be able to check in for the Auto Show at this Drive-In Car Show.

New this year the “Surf the Coast” grand giveaway of a 40-inch flat-screen TV thanks to “Dirty Jack.” Entry forms for the giveaway will be available at noon on Friday at “Dirty Jack’s” Drive-In Car Show and must be turned in to the Gualala Arts Center on Saturday by noon. The grand giveaway winning ticket will be drawn at 3 p.m. during Saturday’s award ceremony; you must be present to win!

On Sunday, July 17 Point Arena Lighthouse Keepers, Inc. (PALKI) is sponsoring its second “Cruise the Coast” event. All Auto Show participants and guests are invited to make the drive to the lighthouse any time from 10 a.m. to 5 p.m. Auto Show participants will receive a pass good for free admission for their cars as part of their check-in bags, and Auto Show attendees can pick up coupons at the PALKI entry in the show, PALKI Board Member Norm Fast’s 1982 MP Lafer, that will reduce the regular price of lighthouse admission from $7.50 per person to $3.00 per person with kids under the age of twelve being admitted free.