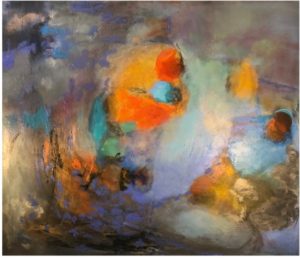 I Love to teach how to do a makeover of a painting that you want to be invigorated, infused with chance and multilayers of depth, while still maintaining  the PARTS YOU LOVE.

Some of my best painting are the one I have painted “over”/make over.

Our schedule calls for a swift work over with new techniques the first day followed by a pulling together of a new work the second day.

• Choice of Oil or Acrylic.

Anne Leveque is a multifaceted Artist

Having first trained and performed as a professional Dancer, then published as Writer/Director and currently, since 25 yrs, a Painter, she has lived her life in the arena of Fine Arts.

Dance provided the discipline necessary for everything else in life and provided her the greatest fulfillment and achievement.

Writing expanded the focus and depth of expression through writing plays in conjunction with the Honolulu Symphony. Poetry often accompanies her paintings providing a glimpse into the layering and interplay of her inspiration.

Painting has taken her into a fully aesthetic and ascetic life of solitude, peace, and tranquility.

“To travel extensively internationally, is to understand humankind more fully and this has influenced my philosophy and painting profoundly.”

FORMAL EDUCATION: Awarded a BS in Science, MS in Educational Administration and MFA in Fine Arts from UCLA.

TEACHING POSITIONS: Anne Leveque has been a teaching assistant at UCLA, Assistant Professor at the University of Utah and San Jose State University, JFK University and presented master workshops worldwide.

PLAYWRIGHT and DIRECTOR: 2005 collaboration with the Honolulu Symphony in presenting a rewrite of Ca-may L”History du Soldat, Stravinsky.

And wrote and directed and produced a contemporary version of Puskin’s Little Tragedies, Hawaii

Wrote and  Directed full  script of Ramyana epic in  Bangkok

CURRENTLY: Feature writer for the Arts Section of the Napa Valley Register (newspaper) and editor of  two books that have  been published.

• Napa Valley College is my second exhibition in USA, 2016,since leaving the USA 24 yrs ago and exhibiting in Asia where I resided for 10 yrs.