Violinist Julia Mirzoev and cellist Davis You, Klein Competition Semifinalists, along with Miles Graber on piano. 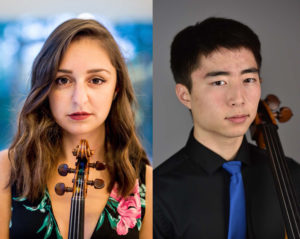 Toronto-born violinist Julia Mirzoev is currently pursuing her Master’s in Music degree at the Yale School of Music, studying with Ani Kavafian, where she also regularly performs in the New Haven Symphony as a substitute violinist.

As a chamber musician, Julia’s group, the Agon Quartet, has most recently received the Yale Chamber Music Competition award. She has also collaborated with prolific musicians such as Andrew Wan, Jonathan Crow, Alexander Kerr, Brook Speltz, Julie Albers, and Barry Shiffman. Her playing has been featured on CBC Radio’s 94.1 and Classical 96.3 FM. Julia’s previous teachers include Jonathan Crow at the University of Toronto, and Jacob Lakirovich.

Cellist Davis You, 17, will be a senior this fall at Palo Alto High School in Palo Alto CA. He currently studies cello with Jonathan Koh and previously has studied with Irene Sharp. Davis has performed solo in a Noontime Concerts recital in San Francisco, a concerto with the Prometheus Symphony as the winner of the 2018 Felix Khuner Competition, and two solos with the California Youth Symphony.

Davis helped design and was the first Klein Teaching Artist for the Music, Mindfulness and Storytelling Program, an educational outreach initiative piloted in Summer 2019 at Cameron House in San Francisco’s Chinatown. He is also a member of the San Francisco division of the Bach to Bach Project, a program that reaches out and builds connections with young children across the world through classical music. An avid chamber musician, Davis is a member of the Young Chamber Musicians program in Burlingame, CA, and participated in the Summer 2019 Music@Menlo chamber music festival and institute. 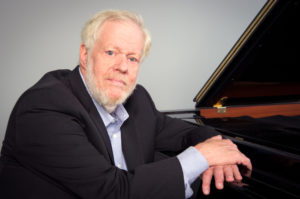 Miles Graber received his musical training at the Juilliard School, and has developed a wide reputation as a superb accompanist and collaborative pianist for instrumentalists and singers.  He has been associated with numerous solo artists, including Itzhak Perlman, Camilla Wicks, and Sarah Chang, as well as with such ensembles as the San Francisco Chamber Soloists, Midsummer Mozart, the Oakland-East Bay Symphony, the California Symphony, Oakland Lyric Opera, Berkeley Opera, Opera San Jose, and the San Francisco Camerata.  Mr. Graber has accompanied master classes by artists such as Midori, Joseph Silverstein, Nadia Salerno-Sonnenberg, Pamela Frank, and Alexander Barantchik.

Mr. Graber is active as a teacher and chamber music coach and has served on the faculties of the Crowden School in Berkeley and the San Domenico Conservatory in San Anselmo. He is a staff accompanist and chamber music coach in the Preparatory Division of the San Francisco Conservatory of Music and is an annual accompanist for the Klein Competition.