In the Redwood Grove at Gualala Arts

in the Redwood Grove

with sponsorship support from

the Whale Watch Inn and The Hotel Breakers

When you take Celtic, Spanish, and Italian Music, and mix it up, you get the true nature of the Black Irish. For Twenty-five years this band has created an original sound that no other band has. With over 500 concert performances to date and airplay around the world, the band has kept very busy spreading their brand of progressive folk music to a large audience. Performing both traditional and original music the band is very focused on presenting 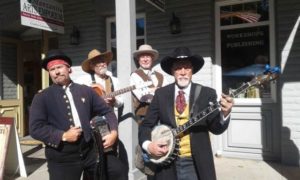 acoustic music in a very exciting up-beat way that appeals to all ages. The band has written and recorded over 96 original songs that appear on any of the bands twenty-five CD recordings. Many of the original works written by the band are based on Celtic history. The band will perform in the Redwood Grove at Gualala Arts Sunday, September 29 at 4 pm. Tickets are $20. Youth 7-17 are free with adult.

Hailing from the historic Gold Rush Country of America, the four member Black Irish Band  have a musical style that is as timeless as the rugged landscape of the west, a tribute to the people whose lives were spent building the world we now take for granted. The band has a large compliment of traditional maritime and railroad music, as well as ethnic tunes in their repertoire. They excel at Irish & Scottish, Italian, and American folk music with an assortment of original songs and traditional western ballads. The bands musical style captures the spirit of the immigrants of this land, the men and women who tamed the Wild West.