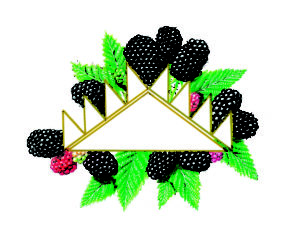 Eric Wilder returns to Gualala Arts with a new exhibit titled “Basket Patterns”. Known for his bold designs, colorful drawings, and sense of history, Wilder’s exhibit, in the Elaine Jacob Foyer, will compliment the Bay Area Basket Makers exhibit in the Burnett Gallery.

A member of the Kashia Band of Pomo Indians, Eric Wilder grew up on the Kashia Reservation, the grandson of Essie Parrish, the last spiritual doctor of the Kashia, from whom he learned traditional teachings as well as songs, dances, and crafts. Although interested in art from an early age, he says he “finally got a break” into a professional art career when he entered and won a comic book store’s drawing contest. From there, Wilder began creating graphic art for software companies and developing games for Lucas Art and MTV. His career in gaming drew on his abilities as an animator, character designer, storyboard artist, and concept artist in developing games like Stars Wars Phantom Menace and Celebrity Death Match.Many members of the Mendonoma coastal community will have seen Wilder’s work in various galleries and shops and at Art in the Redwoods. With this exhibit, Wilder will introduce viewers to his most recent works of art.