A play by A.R. Gurney

$15 in advance, plus $5 day of. Plus a limited number of reserved tables are available for an additional $25 per table. See details below. 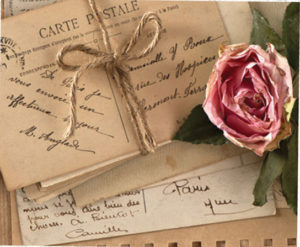 Love Letters is a play by A.R. Gurney that was a finalist for the Pulitzer Prize for Drama.  It was first performed by the playwright himself with Holland Taylor at the New York Public Library. It then opened in 1988 at the Long Wharf Theater in New Haven, Connecticut, with Joanna Gleason and John Rubinstein.

A Unique and imaginative theatre piece which, in the words of the author, “needs no theatre, no lengthy rehearsal, no special set, no memorization of lines, and no commitment from its two actors beyond the night of performance.”  The piece is comprised of letters exchanged over a lifetime between two characters, Andrew Makepeace Ladd III and Melissa Gardner, both born to wealth and position.  The two grew up together, went their separate ways, but continued to share confidences. As the actors read the letters aloud, what is created is an evocative, touching, frequently funny but always telling pair of character studies in which what is implied is as revealing and meaningful as what is actually written down.

SPECIAL OPPORTUNITY: In recognition of Valentines Day, Gualala Arts has a special option for a special evening. “Love Letters” ticket holders can reserve a special table for two for an additional $25. In addition to the special reserved table, there will be a bottle of sparkling wine or sparkling water, plus a special homemade sweet treat, and a unique, personalized Valentine created by Gualala Arts’ Kendra Stillman. What a great way to make “Love Letters” an even more special occasion. A limited number of tables are available. Reserve now by calling the Gualala Arts office. 707-884-1138.

With a solid background in theatre and television production, Cathy Spielberger Cassetta founded The Tabard Theatre Company in San Jose in 2001 as a “different” theatre company.

Tabard’s mission is to provide live entertainment experiences that are enlightening, appropriate and affordable for audiences of all ages. We champion new works, innovative interpretations, and unique plays rarely staged. Tabard is an inclusive environment where the community can participate in every aspect of the plays, musicals, educational programs and music concerts we produce. With altruistic attention to the underserved, Tabard reaches out to communities such as the visually impaired and children in low-income areas, and donates a portion of each production’s
concessions proceeds to a designated local charity.

Recently retired as a professor of humanities, literature, and composition at Foothill College, Kurt Gravenhorst continues his “side career” as a actor which began 45 years ago with the Nevada Repertory Company while attending graduate school at UNR for an M.A. in English.  After completion of the M.A. program, Kurt would later continue his academic study, receiving his second M.A. degree in Humanities, while continuing his theatrical study by taking additional acting courses at Stanford University, the American Conservatory Theatre, and acting in numerous Bay Area theatre productions.

In addition to being a recurring actor with Tabard Theatre ––“Love Letters” marks his seventh Tabard show–– his many Bay Area performances include Red Clay and the world premier of My Antonia  (TheatreWorks), The Kentucky Cycle (Willows Theatre), Santos & Santos (Teatro Vision), A Moon for the Misbegotten (Pear Theatre), Side Man (Dragon Theatre), and the indie film, The Last Time I Saw Soap (a 2011 New York International Independent Film Festival selection).

Kurt is thrilled for the opportunity to bring this poignant, heart-felt production of “Love Letters” to ­­­­­­­­­­­­The Gulalala Arts Center.