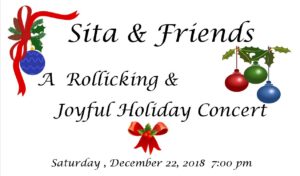 Sita Milchev returns with her singing friends on Saturday December 22nd to Gualala Arts. This is the third performance of “Sita & Friends” and this exuberant, amusing and joyful concert will fill you with holiday spirit.  She will be joined by some of our favorite local singers/actors that include:  Teo Ariola, Randy Costa, Mark Erikson, Kim Ghezzi, Jodi Smith and Pat Wilson with surprise cameo performances from some of Sita’s other friends.  Don Krieger will serve as musical director as well as keyboard accompanist extraordinaire.

Sita has been thrilling audiences for 60 years, singing all over the world and directing musical shows for over 35 years, including several Broadway Cabaret style shows at Gualala Arts over the past decade.

The show begins at 7 p.m. with doors opening at 6:30 p.m.  The cost is a mere $20 per ticket; $5 more the day of the show. Kids under 17 are free. Tickets are available at the Gualala Arts Center, The Dolphin Gallery and www.Brownpapertickets.com.  Proceeds from the concert benefit both the Gualala Arts Center and The Coastal Seniors “Meals on Wheels” program.

Concert tickets are $20 in advance, $5 more day of the performance.