STORIES FROM A DISORGANIZED MIND 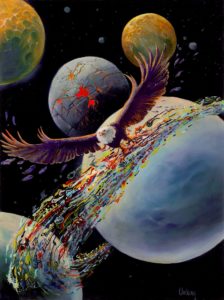 STORIES FROM A DISORGANIZED MIND

Don’t tell anyone but sometimes I just make stuff up.  It really is more fun that way.  At least for me it is.

Don’t get me wrong, sometimes I go into a painting with a fully formed idea and execute it as imagined.  Done.  Most of the time, the idea changes, develops, grows out of the process.  There is a dialogue between paint and painter.  A give and take that often results in as much surprise as intention.

Surprise is a great motivator for painting this way.  But sometimes I just walk in the studio, face the blank space, no ideas, no intentions or expectations and well, just make stuff up.  Don’t tell, okay?

Jim was born in Hawaii and spent his youth traveling as a “Navy brat”.  He spent most of his adult life in the San Francisco Bay Area, where he and his wife, Lu, raised their three boys. He graduated from California College of Arts and Crafts in 1974.  “Those were interesting times, and some of those artistic influences have lasted a lifetime,” he says.

After studying “serious art” at California College of Arts and Crafts, Jim’s influence widened to include not just Don Martin but Salvador Dali, M. Although my subject matter is not traditional, my techniques in oils and pen and inks are.

Over the years Jim has done political cartoons for the Sierra Club, and Communications Workers of America. He has been a member of The Hayward Arts Council and now is a member of Artist’s Co-op of Mendocino, North Coast Artist’s Guild, Artist’s Collective at Elk, The Gualala Arts Center and The Mendocino Art Center.

Jim’s art has taken many directions, but he tries to stay true to his roots of political and social commentary.  However, since moving to the Mendocino Coast, he has found it impossible to live in this beautiful place without trying to say something about that artistically as well.

“I don’t think I have ever presumed to inspire or be profound, but I do, on occasion try to get a laugh,” he says.  “I hope people find my observations and interpretations interesting and honest.”

You can see more of Jim’s work at the Artist’s Collective in Elk, 6031 S Hwy 1, Elk, or visit the website www.artists-collective.net  .  Also visit the Bay Window/Zacha Gallery on Main Street, Mendocino CA or The Green Door Gallery on Laurel Street in Fort Bragg.