Artists at Albatross Reach with Jennifer Beattie and Adam Marks

The final concert for Artists at Albatross Reach for 2017-18 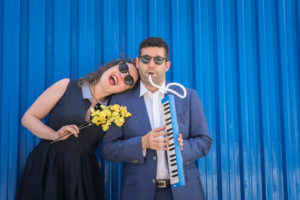 Curators and founders of Artists at Albatross Reach Jennifer Beattie, a mezzo-soprano from Philadelphia and Adam Marks, a pianist from New York City, annually invite artists from varying fields and communities to collaborate and create new works at a retreat space on The Sea Ranch.

Artists at Albatross Reach is an arts residency/incubator located on The Sea Ranch created and co-directed by mezzo-soprano vocalist Jennifer Beattie and pianist Adam Marks.  There, they have developed a unique collaborative process to champion the development of new multidisciplinary works, as well as a rich environment for curious community members and local artists to explore and participate in the art-making. Pieces premiered on this Memorial Day concert in the past have gone on to have national and international performances. Juraj Kojs’ concept, The Black Queen, will have it’s full premiere with Jennifer and Adam in Miami this September. Jon Irabagon has developed the pieces premiered on this concert in 2017 into an evening length work featuring all of the 2016-2017 Artists at Albatross Reach team that will premiere in Brooklyn in June. We hope the new works presented on this concert will also continue their growth beyond Gualala, but you have the opportunity to see them first.

About The Artists at Albatross Reach

Albatross is an interdisciplinary duo focused on curating new collaborative projects, performing under-represented art song repertoire, and venerating canonical works by programming them in dialogue with contemporary voices. Comprised of vocalist Jennifer Beattie and pianist Adam Marks, Albatross’ work has been dubbed “a smashing success” by the San Francisco Examiner. With over 15 years of performance history together, their joyous chemistry—whether in a traditional recital format, singing through tubes, arguing in rhythm, or leading a kazoo-along—is palpable.

Albatross deeply enjoys using the discoveries they’ve made to mentor the next wave of composers and performers in the collaborative process. For nearly a decade, they have been Artists in Residence with the Yale College Department of Music Composer’s Seminar, where they workshop and premiere faculty and student pieces for piano and voice. They were also founding faculty members at New Music On The Point, and have given masterclasses across the country to facilitate deeper communication both on- and off-stage.

About the Guest Artists

Jason Charney’s work as a composer addresses the connections among physical phenomena, sensory perception, and performative gesture.  He writes music for both instruments and electronic media, often combining them. He is also an active electroacoustic performer, both as a soloist and with instrumentalists.
As a sound artist, Jason creates sound installations that use technology to modulate sonic and embodied experience of a gallery or repurposed functional space.
He holds degrees in music theory and composition from the University of Kansas and Bowling Green State University and currently resides in Baltimore, Maryland, where he is pursuing an MFA in Intermedia and Digital Art at the University of Maryland, Baltimore County.

Ryan McMsters is a music maker in Pittsburgh whose work focuses on the relationship between performer, sound object, and audience in traditional and non-traditional settings.  Recent commissions include pieces for pianist Keith Kirchoff, Kamratōn, So Much Hot Air, and Real Loud. He is a founding member of WOLFTRAP, a band that focuses on the history and development of oral traditions in new music making. A frequent collaborator for theater and dance, Ryan’s work has supported productions by City Theatre, Quantum Theatre, No Name Players, Seton Hill University, and others. Ryan is currently an Andrew Mellon Pre-Doctoral Fellow at the University of Pittsburgh where he studies music composition and theory and his research focuses on the use of timbre, distortion, and noise as both a musical element and a means of societal agency.

Jenny Perlin is an artist working in Brooklyn. Her practice in 16mm film, video and drawing works with and against the documentary tradition, incorporating innovative stylistic techniques to emphasize issues of truth, misunderstanding, and personal history. Her projects look closely at ways in which social machinations are reflected in the smallest fragments of daily life. In her films, Perlin often combines handwritten text and drawn images, embracing the technical quirks of analog technologies.

She is represented by Simon Preston Gallery New York and Galerie M+R Fricke in Berlin. She teaches at The Cooper Union and The New School in New York. 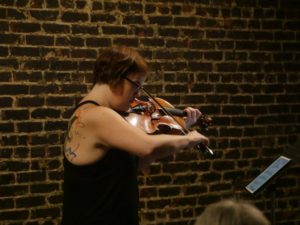 Violist Diana Wade likes to make strange sounds, usually on the viola. In her performance of Berio’s Sequenza VI, Diana was praised for playing with “both athletic and operatic ferocity” and “throwing herself into tremolo passages with a physical force that shook her and a sonic one that practically shook the walls” (Mark Swed, LA Times). If none of this is ringing a bell, then you may recognize her for saying “Shia LaBeouf” in that internet video.

Diana enjoys a richly varied musical life that she is cultivating in Los Angeles. Not only can she be heard recording for film and television, but Diana can be seen performing with ensembles such as Los Angeles Chamber Orchestra, Los Angeles Master Chorale, wild Up as well as in concert series such as Jacaranda, Tuesdays @ Monk Space, and the Hear Now Music Festival.

Formerly a founding member of the Argus Quartet, Diana has collaborated with Anthony Dean Griffey, David Shifrin, the Brentano Quartet and worked with composers Christopher Theofanidis, Martin Bresnick, Andrew Norman, and Thomas Kotcheff in the performance of their music.

Diana holds degrees and certificates from Temple University, Cleveland Institute of Music and University of Southern California and she studied with CJ Chang, Jeffrey Irvine, and Donald McInnes. She plays on a viola made by Tetsuo Matsuda from 2004 that she’s lovingly named Fernando. In the rare moment that she’s not playing viola, Diana enjoys writing lists, dabbling in composition, running, and wishing she were an opera singer.