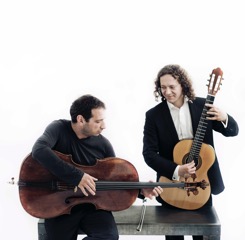 This concert presented in honor of donors RC and Tina Vasavada.

Two outstanding young Russian soloists – cellist Boris Andrianov and guitarist Dimitri Illarionov – combine forces in this rare and wonderful combination. Andrianov, who plays the cello with the ease of a violin, and Illarionov, who does not seem to know any instrumental boundaries, show an unbelievable breadth of musicality. Both musicians won important competitions. Their duo CD “Classical Duo” (by Delos Records, USA) was in the preliminary list of nominations for Grammy Award. This CD, as well as Dimitri Illarionov’s solo CDs with Naxos, Daminus Records and Edition Doberman and Boris Andrianov’s CDs with Quartz Records, were highly acclaimed by critics. The duo has given concerts in Europe, North America, and Asia. They took part in some significant festivals, such as the 2004 Los Angeles Festival of Russian Culture, the Tongyeong International Music Festival (Korea) and the Crescendo International Music Festival in St.Petersburg, Russia. In 2005 they were invited to play at the opening ceremony of the Hannover Messe and had an appearance between the speeches of German Federal Chancellor Gerhard Schroeder and Russian President Vladimir Putin. Among other venues where they have performed as a duo are the 2006 G-8 Summit in Saint-Petersburg, the Schleswig-Holstein Music Festival, the Mecklenburg-Vorpommern Music Festival and in France: Festival de musique d’Auvers-sur-Oise, the Festival Pablo Casals Prades and the Annecy Classic Festival.

Cellist Boris Andrianov, winner of the bronze medal at the International Tchaikovsky Competition, is the first Russian laureate at the International Rostropovich Competition in Paris. His talent has been recognized by musicians such as Zubin Mehta – “his profound musicality and phrasing impresses one almost immediately.” and Daniil Shafran – “Boris Andrianov is probably one of the most talented cellists of Russia at present.” Boris Andrianov has performed at the Moscow Conservatory halls, Moscow Philharmonic Hall, St. Petersburg Philharmonic Hall, the Concertgebouw, Tokyo’a Opera City and Suntory Hall and the Vienna Konzerthaus. He has performed with the French National Orchestra, the Mariinsky Theatre Orchestra, the Beethoven Orchestra with such conductors as Valery Gergiev, Pavel Kogan, Alexander Vedernikov, Krzysztof Penderecki and David Geringas. His CD of Rachmaninov and Shostakovich sonatas with pianist Uri Urasin on the Quartz label received the Gramophone’s “Editor’s Choice”.

Guitarist Dimitri Illarionov is the winner of two of the most prestigious guitar competitions in the world – the International Guitar Foundation of America Solo Guitar Competition and the International Guitar Competition of Francisco Tarrega (the first time in 42 years that the winner was from Russia). Dimitri has played in some of the most prestigious halls in the world – Tonhalle (Zurich, Switzerland); Lutfu Kirdar (Istanbul); Great Hall of Moscow Conservatory; Concert Hall “Bulgaria” (Sofia); Osaka Symphony Hall; “Schleswig-Holstein” Music Festival. He teaches at the Russian Gnesins´s Academy of Music. “… with such temperament, musicianship, richness of colour, radiance, sense of timing and feeling the acoustic qualities of his soft-toned instrument that the combination of all these abilities, coupled with an evident gift for entertainment, is the best expressed in one single word: wow!” “Tages-Anzeiger” (Zurich, Switzerland)