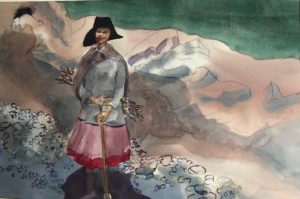 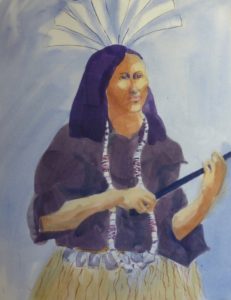 Well known to many local lovers of art, O’Rourke’s work has been exhibited in many Gualala Arts shows, including Art in the Redwoods, where he took 1st place in watercolors in 2011 and 3rd place in watercolors in 2013.  While he works primarily in watercolor, O’Rourke also uses other media, including charcoal, soft pastels, and oil pastels.  In addition, he says printmaking is “another of my favorite art forms,” for which he uses a planetary gear art press and carved relief block or intaglio processes.

Influenced by renowned artists Alex Powers, Don Andrews, and Charles Reid, O’Rourke describes his style as “chiefly figurative and plein-air” and  points to the nude figure as a favorite subject, which he treats in a number of ways, including pop art or manga, which perhaps reflects his extensive early experiences with cartooning.  Visit  saatchiart.com/orourke to view the breadth of O’Rourke’s style, ranging across impressionism, expressionism, and realism. “I love painting from life, especially nude studies made possible at weekly life drawing drop-in sessions at Gualala Arts,” says O’Rourke, adding that “The challenge always is finding the dynamic, fleeting expression of the model, right now, in what is written in her face, in the sinuous flow of body lines, or in the bold and subdued musculature he presents in a pose.” 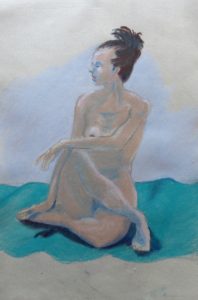 But O’Rourke is not only an artist:  with a degree in civil engineering from CUNY and an MFA from Vermont College, he has consistently mixed business with pleasure.  Thus, as he pursued engineering projects abroad and across the country, O’Rourke also painted, developing an extensive portfolio of work.  Now settled on the rugged northern California coast near Manchester Beach, he takes inspiration from the land and seascapes around him. And sometimes, he says, he paints scenes that are “etched in memory from my work and travels abroad.”

The Gualala Arts exhibit shows the range of O’Rourke’s visionary work and the opportunity for visitors to see why his paintings have earned numerous awards and are included in many private collections. 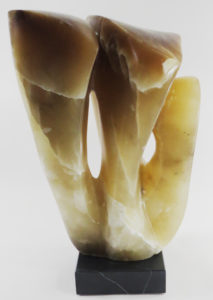 This will be the first Dolphin exhibit for Dayan-Whitehead, a native San Franciscan who grew up in Portland where she studied ballet, jazz, and tap and experimented with motion and form.  Her interest in dance led eventually to work in costume design and construction, and why after receiving a master’s degree in business, she moved into product development and advertising.

Today, Dayan-Whitehead sees strong connections between dance and sculpture: the creative process that yields her sculptures is itself a dance.  Her hope is that with each work, “the dance of light and shadow’ will resonate with each individual viewer.  “Come with me,” she says, “let us make the stones dance.”

Dayan-Whitehead says she found her way from dancer, designer, and product developer to her work as a sculptor of stone via “a circuitous path.” Even as she was performing and pursuing an education, she was also “a rock hound”, she says, who started a collection in her youth and was always fascinated by rocks of all kinds. She also participated in a number of artists’ workshops—on ceramics, on mask making, and on carving—and she studied with two sculptors, traveling to Italy for further study that led to her particular vision for her sculptures. 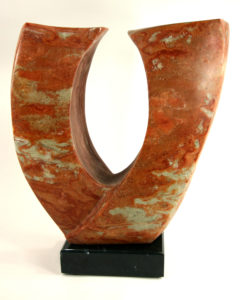 Visitors to this exhibit will no doubt be fascinated by Dayan-Whitehead’s sculptures, which appear soft, flowing, translucent, as if they are floating—“quite the opposite of the density, hardness, and inflexibility ordinarily ascribed to stone.”  She has exhibited these stunning sculptures throughout Sonoma County and the Bay Area.  Visit renedayanwhiteheadstudio.com for further information about her work.