“Never knowing what is going to come out on canvas… I have been painting stuff that I never consciously knew was there. A free brush and an unchecked mind has led to some interesting work.” — Michael Connor, about his recent work.

Michael Connor is an American artist best known for his abstract painting projects. His work examines the relationship between form and fluidity.

Born in Minneapolis, Connor briefly attended the Minneapolis School of Art before moving to California where he worked as a Creative Director in the Silicon Valley advertising industry.  He drew and painted during those career years, but “nothing really big, just sketches and such, most paintings I never finished.”

After his father’s death in 2002, he felt the need to create more. His family gave him a camera for Christmas that year and he began exploring creating images, but the need to paint was growing stronger. “I started digging out old sketches and art work from years past and started posting them on Social Media. Knowing my fears about being looked at as an artist was what a key thing holding me back. It was excruciating to do but it helped tremendously. I started painting again and the work was better.”  And then he had a heart attack.

Following this near-death experience, where “I was in a place as inﬁnite as the universe but I felt I was incredibly safe and secure…”, Connor began seeing a hypnotherapist as part of his recovery work. This is where his body of work began to take on a lucid form of storytelling. His non-linear narratives illustrate his experience navigating what he candidly describes as “going somewhere else.”

Mike will lead a discussion about his near death experience after the reception on the evening of February 16. Enjoy blues music by “The Blue Zone” from San Francisco, catered appetizers and a no-host bar.

See this article to learn more about Connor’s work.

Below: “Whalalaland: Pool”. From “The Whalalaland Series.”  Immersing myself in the beauty of this area I want to just jump in. 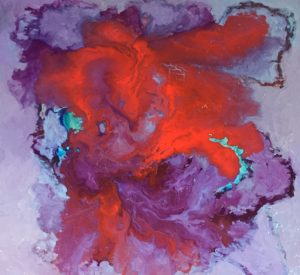 Right:  “The Journey: Came into Being”, from the “The Journey Series”. Back Into the womb.