Auditions for spring production of “Guys and Dolls”

Auditions for a production of "Guys and Dolls" 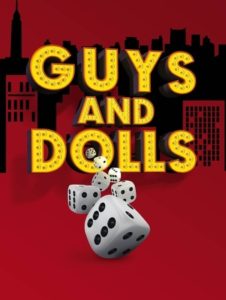 “Guys and Dolls” is a Pulitzer Prize and Tony Award winning musical based on the short stories of Damon Runyon. It is set in the 1950s and follows the adventures of a group of gamblers and hot box dancers with Sergeant Sarah Brown and the Salvation Army working to save the souls of these shifty characters. Music and Lyrics are by Frank Loesser and the Book is written by Jo Swerling and Abe Burrows. With memorable songs such as “Fugue for Tinhorns”, “Luck Be a Lady”, “Miss Adelaide’s Lament”, “Bushel and a Peck”, “Sit Down, You’re Rocking the Boat” and the Title song “Guys and Dolls”, this show is sure to be a colorful romp through the New York underworld and back.

Auditions will be held at the Gualala Arts Center on September 17th from 1 pm to 4 pm with Call-backs on Sunday, September 18th from 10 am to 1 pm.

Individuals auditioning should prepared to sing a song from the show and read a scene based on specific characters. Sides will be given at audition, but you are encouraged to contact Bryn Harris for a perusal script prior to audition at (707) 884-4386.

A Musical Fable of Broadway
Based on a Story and Characters of Damon Runyon Music and
Lyrics By:  FRANK LOESSER      Book By:  JO SWERLING and ABE BURROW

Is presented through special arrangement with Music Theater International (MTI).
All authorized performance materials are also supplied by MTI.
www.MTIShows.com

Bryn Harris has been dancing since she was 3 years old. Traveling from small town Gualala, to New York City, she made her mark at a number of companies including the Pacific Conservatory of the Performing Arts (PCPA), where she received the Kristy Scholarship for Musical Theater.

Bryn was the choreographer for the world premiere musical “One”, which went on to tour 13 countries. She has spent years contributing to both sides of the table as performer and choreographer for Summer Repertory Theater and PCPA Theatrefest’s productions of “Beauty and The Beast”, “Oliver”, “Annie”, and “Into the Woods”.

Bryn received her Bachelor of Fine Arts in Directing from University North Carolina School of The Arts where she worked with Gerald Freedman on the 50th anniversary of “West Side Story”, and “Sunday in the Park with George”. She recently returned to PCPA as a guest artist, teaching a semester of movement training.

Bryn also choreographed “The Wizard of OZ” with 150 puppets ranging in heights from less than one-foot high, with actors standing in trap doors inside the stage (Munchkins), to puppets over 29-feet tall (Winkies). This show grossed more than any production in the history of PCPA winning Bryn the Allan Hancock Musical Theater Award for outstanding originality and choreographic design.

Bryn returned to Gualala in 2010 and has been part of many local productions as choreographer, performer and/or director. Recent productions include “Of the I Sing”, “Jekyll and Hyde the Musical”, “Honk!” and her one-woman Valentine’s show in 2014.

Bryn is thrilled to have the opportunity to give Musical Theater back to the community.  This will be her directing debut at The Gualala Arts Center and she looks forward to collaborating on what is sure to be a fun ride.